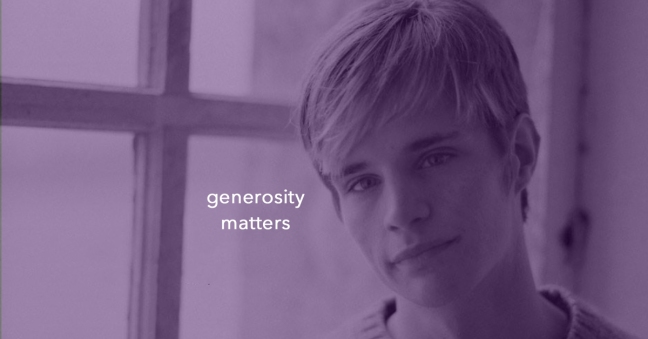 Generosity comes up a great deal from pulpits this time of year. I particularly loved an annual Campaign letter that came from my former church in Washington, DC a few years ago. The chair of the Stewardship committee began her letter with refreshingly frank words: “It is once again time…” she essentially wrote, “Well friends, it’s that time of year again.”

We have indeed reached “that time of year.” The annual campaign kicks off this week. Additionally we have been nagging you about a coming capital campaign for our building, and we’ve had a visit from our international partners in ministry. So many opportunities to be generous!

The Bible is conspiring with us. At some point, in the times of yore, a group of preachers must have paid off the international committee that comes up with our Bible selections to make sure we had a few weeks of good “give away your money” lessons as the church prepares the budget for the coming year. So when mid-October rolls around, we talk about money in church.

I want to talk about more than money today.

Generosity is about more than what you do with your wealth. Jesus wasn’t concerned about getting money for his church when he talked to the rich young ruler. He was concerned about the state of man’s soul.

After Jesus tells him to sell what he owns, and give the money to the poor, “the man was dismayed at this statement and went away saddened, because he had many possessions.” The possessions keep him from following Jesus. This is the only story in the New Testament when someone is invited to follow Jesus, and he doesn’t end up following.

Jesus interacted with a great number of wealthy people. Mary Magdalen, part of his band, was wealthy. Nicodemus and Joseph of Arimathea, powerful wealthy landowners, were part of his circle. Jesus walked with the rich and the poor alike. He didn’t tell all of them to sell all of their possessions. I think this young guy was different. His wealth, his possessions, they owned him, confined him.

The rich young man is a pre-Dickensian Ebenezer Scrooge. He misses out on the grace, the freedom, the joy of Jesus’ disciples. He walks away. It is in this sense that generosity matters. Of course what you do with your money matters, but more than dollar amounts, more than donor levels, our interior orientation matters. “Seek first the kingdom of God” Jesus says, first. “And all these things will be added to you.”

When I meet with couples for pre-marital counseling,

So I ask them to prepare a budget, and to make a visual representation of that budget. I don’t ask for exact figures, but I do ask to see percentages. Specifically, I ask them to have a conversation about savings and giving, to come back ready to talk about what they are saving for and where they are giving money away. You’d be surprised how often couples forget this important part of the homework.

My grandmother’s generation used to say that before you did anything else with your money, you set aside ten percent for your tithe, and ten percent in savings. Too few of us are saving. We hear the news reports all the time We tend to think of money from scarcity these days. We don’t practice putting a little money away. So I remind couples talk about why you’re saving, for what you are saving. It changes the conversation around money. Why are we saving tends to be a pretty hopeful conversation. You talk about education, your dream house, retirement, vacations.

The couples also forget the second part of the homework. Too often in our culture we treat generosity as a “last fruit.” We give $20 here or there. We say, “I can spare that bit of money.” But the Bible asks us to do the opposite. The Bible asks God’s people to give away their “first fruits.” Do you have a practice of generosity? Do you have a specific practice that starts each month.  You could set up an auto-debit on the first of the month, just like your rent. You could give away a percentage of your income, even if it is not 10%. Give so that you notice. And do it first, make it a priority.

Incidentally, I have this conversation with couples because they ask me to help them plan for a marriage, but I recommend the practice to everyone, single or couple, married or divorced. Build a budget, and know what you are saving, why you are saving. But also, centrally, know what part of your money you are planning to give away. We practice generosity with our money, because money is a measure of what we value.

Generosity is more than what we do with our money, of course. This week I was twice reminded, caught off guard, by profound generosity. The first reminder came as I listened to our partners from El Salvador talk about the families who chose to remain in country and to sue their government on behalf of those who are internally displaced in the country by violence.

Women and men and children who received an offer to escape, to move into a safe situation of asylum somewhere far from the death threats of the gangs, illogically chose to stay and to fight for justice. And they won, the Supreme Court ruled in their favor that the government must do more to protect those who face violence. The generosity of these poor and vulnerable people, to lay aside their own security, will provide security and hope for their neighbors. That is generosity. That is putting yourself on the line.

The family of Matthew Shepard

The second story of generosity came later in the week. The New York Times shared the news that Matthew Shepard’s body will finally be laid to rest later this month in the National Cathedral, an Episcopal Congregation and landmark in the nation’s capital. Matthew died 20 years ago yesterday, in a hospital in Fort Collins, Colorado, the victim of a hate crime. His death helped our nation define the term “hate crime.” Two young men, motivated by homophobia, brutally beat and pistol whipped Matthew on a cold October night and left him to die tied to a fence. A cyclist found him, still alive, 18 hours later. At first he thought the young man on the fence was a scarecrow. Matthew was rushed from Wyoming to a hospital in Colorado. He died six days later.

I remember Matthew’s death well. I too was in Colorado, still in high school, and still too scared to come out myself as gay. The story of a young man, just a few years older than me, just a few hours drive away, a college student, being attacked for his sexual orientation was terrifying and terrifyingly unsurprising. Wyoming and Colorado, really the whole of the United States at that time, even more than now, had very few safe places for the LGBTQ+ community.

Matthew’s death did end up surprising me in the end. The surprise came later. I remember interviews with Matthew’s loving family, their images and their willingness to talk about their son’s story and his orientation. I remember the images of his packed funeral in Wyoming, at the Episcopal Church that was too small to hold the crowd, and so it was being live-broadcast at other churches around town. I remember the overflow crowd for a memorial service at Denver’s Episcopal Cathedral. The outpouring of love, and concern, and outrage at Matthew’s death gave me hope.

In the years since Matthew Shepard’s death, his mother and friends have given away their time. They have told his story again and again in plays, in movies, on college campuses, in congressional hearings, as painful as the story always is to tell. Judy Shepard and a collection of others have given their memories and their lives to change the way LGBTQ+ people are treated in this country, legally and otherwise. And this week, the family chose one more time to give.

Matthew’s body will rest with other heroes in the great church where we memorialize presidents and senators. His grave will be visited by millions, will become a site of pilgrimage. Matthew Shepard’s family have been incredibly generous, with their grief, with their story, with their time, with the memory of their son.

The liberation theologian Gustavo Gutierrez writes of the power of generosity, in the worst moments. Those times when we, like Job, have bitter complaints, and it seems like God’s hope is far off. Gutierrez writes about the people who give their time, who create organizations, who call meetings, who serve in soup kitchens, and collect diapers for infants. He talks about those who organize and reclaim respect for freedom and human dignity, who tell their stories again and again, even in the worst of political and economic circumstances. Gutierrez says:

These people are the small but contagious lights that illuminate with their dedication and generosity a dark night. The light is not at the end of the tunnel, but is rather inside the tunnel in the people who travel through it. These people illuminate the tunnel and furthermore they break down its wall and its ceiling…

Generosity matters, because generosity has the capacity to bring hope in the worst situations. Practicing generosity can reorient lives, away from small selfishness, toward abundance, toward joy, toward the way of Jesus. Generosity is about what we do with our money, yes, and it is also how we spend our time, how we spend the currency of our lives.

Many of you have heard me quote my former rector in Washington, The Rev. Dr. Luis Leon, when talking about generosity and money. You’ll probably hear me say this again this giving season: “Money is a powerful tool. If you can give away some of your money, you have power over the tool. If you can’t give away some of your money, it has power over you.” Generosity is an orientation, an economic orientation and a spiritual orientation.

I hope you have a practice of generosity, one that you continue to develop. I hope you value the work that Holy Communion is doing enough that you want to give some of your money here to support our annual campaign. I hope you will be convinced by the planning your vestry has done, and you will want to give some money again when our Capital Campaign kicks off to renovate this space. But more than that, I hope your practice of generosity spills out beyond wealth and beyond these walls as well. I know, for a fact, for so many of you it does. I know I am gifted to serve in such a generous congregation.