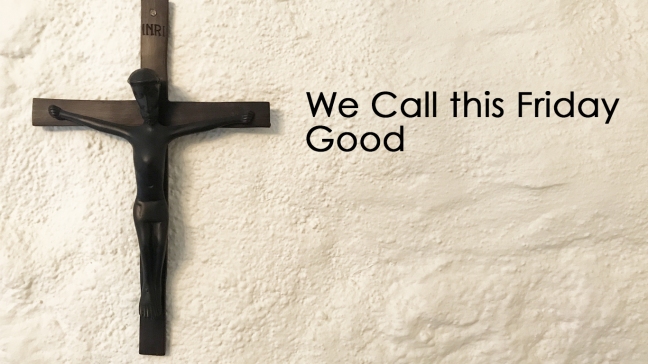 We do not always behave the way God hopes. We are all in need of forgiveness. We are all in need of forgiveness, of grace, of love. I have a bit of a Good Friday confession to make to you all. In my initial draft of this sermon, my first sentence was this: “We are not the people God wants us to be.” If my original sentiment were true, I’d have a hard time calling this Friday good.

That sentiment is hard. It gives a sense of drama as we contemplate the cross, but as I read, and prayed, and thought more, I disagreed with my initial draft “We are not the people God wants us to be.” So I amended my words. I’m showing you the work that got me here, because nuance is important when we get to Good Friday, when we talk about the cross, and grace, and sin, and forgiveness:

We are the people God want us to be.

We do not always behave the way God hopes we will behave.

Christians, a few centuries after Christ, found themselves in a position of power in society. The emperor’s conversion to the new religion meant that suddenly Church and State stood together. People in power are often unready to deal with sin. We like to shift that away. Power, economic “success,” can make us feel a bit invincible, can convince us we must be right, must be blessed. So the newly empowered Christians had a hard time accepting their own culpability in Christ’s death. They shifted the blame.

Starting in the early centuries of the movement, Christians used John’s Gospel to justify blaming the Jewish people for the death of Jesus. Reading John can be difficult for us today, especially in a community where so many of us have Jewish friends, to hear the invective, “the Jews” over and over again is hard. To hear the Jewish people show up as a character, really a caricature, doesn’t sit well.

We could translate the word from Greek as “The Judeans” or even “the religious authorities.” Some of our sisters and brothers in Protestantism have made that change. I chose not to change the translation. I think it is important to face our history. We have to own up to a legacy of anti-Semitism. We have to know the sins of our religious community. It doesn’t help to shift the blame. In fact, it does more damage.

Christ died at the hands of human sin. To face the cross is to face hard questions about capital punishment and the treatment of incarcerated human beings. To face this story, following the work of the theologian James Cone, is to ask why so many black men are put to death in America today, why so many people of color are incarcerated. We don’t ask “why?” enough. Why do we treat our fellow human beings so inhumanely? Why do we forsake our siblings, why do we abandon people in a broken prison system and call it justice? Why do we still allow our State to execute human beings who have had fingers pointed at them by a mob?

The cross is not about God’s need for a sacrifice. The cross is about God’s willingness to step into the broken human system fully, allowing the inevitable consequences of human injustice to play out. God chooses to identify with the victims in human history, with the poor, the scourged, the lynched. God goes to the worst situation imaginable. Jesus suffers outside the walls of the city, as the Book of Hebrews has it, out with those who are shunned by society, out with those who are our victims.

The cross and forgiveness

As I hinted above, it can be hard for the economically empowered, for the socially privileged, to admit we need forgiveness. In truth, at times, it is hard for all of us. On some level all of us wishes we were perfect. Oh if wishing made things true. Sometimes we like to play the games of comparison: “I’m not nearly as bad as this person. In fact, I’m pretty good.” Those games do a lot for the ego, and very little for our soul.

If we are honest with ourselves, we all have caused hurt. We all have acted at times from less than our best self. Flannery O’Connor often spoke of sin this way, following St. Augustine. Sin happens when we choose a “lesser good.” We choose “public safety” and we put our emphasis there, and we forget to ask about how someone who has been caught up in our so-called justice system might be able to reintegrate into society. We choose the lesser good of “safety” instead of the greater good of what Dr. King called “The Beloved Community” and what Jesus called “The Reign of God,” that vision of a human flourishing where no one is left out, no one is left to rot, no one suffers like Jesus.

Jesus taught a great deal about forgiveness. “How many times must we forgive?” his disciples ask. “Seventy times seven,” Jesus’ way of saying, “as many times as it takes.” When his followers ask him “how shall we pray?” Jesus response includes the line: “Forgive us our trespasses as we forgive those who trespass against us.” I wonder whether the centrality of forgiveness is Jesus’ teaching has something to do with how bad we are at forgiveness.

Forgiveness is easy to embrace as a concept, and forgiveness can take a lifetime to learn as a practice. As the folk musician Patty Griffin sings: “It’s hard to give. It’s hard to get. But everybody needs a little forgiveness.”

The woman said to Peter, “You are not also one of this man’s disciples, are you?” He said, “I am not.” [A little while later] Simon Peter was standing and warming himself. They asked him, “You are not also one of his disciples, are you?” He denied it and said, “I am not.” One of the slaves of the high priest, a relative of the man whose ear Peter had cut off, asked, “Did I not see you in the garden with him?” Again Peter denied it, and at that moment the cock crowed.

Peter knew what he had done. There was no “undo” button.

The comedienne Lily Tomlin has said that, “Forgiveness means giving up all hope for a better past.”

In order to step into forgiveness, we must face the truth. We must tell our stories, of how we have been hurt, of how we have hurt others. And we must take the next step. We live with the story, and we don’t let the pain we have suffered, or caused, be the end.

On the cross God took the worst of human stories, betrayal, suffering, denial, death, and wrote good news into human history. We can’t undo the past, but we can build a better future. The rector of my former church, the Rev. Dr. Luis Leon once wrote: “Peter’s tears of sorrow will wonder of wonders, be made a fountain of new life. God will fashion out of this wreckage of denial a new life of grace and power. That is why we dare to call this Friday ‘good.’”

Knowing the kind of forgiveness Peter came to know, brought him a new life. Peter was forgiven. Knowing we are forgiven has real grace, real power. We also, following Jesus’ teaching, have the ability to forgive. There is also grace when we choose to forgive, when we become bearers of grace for others.

I’m reading between the lines in Scripture here, but I wonder sometimes whether Peter’s experience of forgiveness, his experience of Jesus forgiving his betrayal, meant that Peter was ready for Paul. When Saul the persecutor became Paul the preacher, the church in Jerusalem was a little nervous. It is Peter who sticks up for Paul. Peter offers forgiveness. Peter’s forgiveness allows Paul to live into his call. Thanks to Peter Paul’s missionary zeal and pastoral letters shape the church. Peter is able to see God’s work at hand in the former persecutor. I wonder whether Peter is able to see Paul’s true repentance, because he himself has known God’s forgiveness.

2 thoughts on “We call this Friday Good”