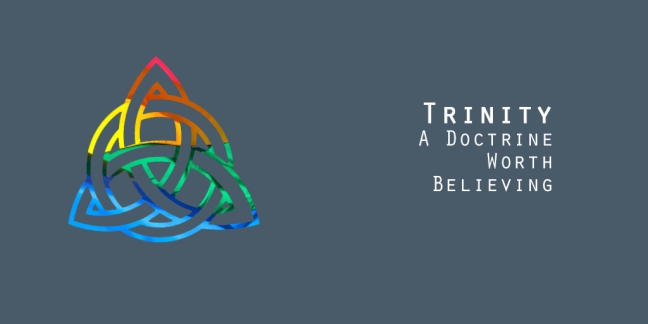 Trinity Sunday, today we celebrate the three-in-one, the one-in-three. Today we hold the feast of the life of God: Father, Son, and Spirit. Today traditionally, the preacher begins with some jokes about the difficulty inherent in this teaching. Oftentimes that is because the rector has wisely assigned Trinity Sunday to an unsuspecting assistant. Watch out Marc, next year you’re tackling the doctrine. The other traditional jokes are math jokes. Today is the day we celebrate that God is bad at math 1+1+1= 1. God has an issue with arithmetic.

We live in a time that is uncomfortable with doctrine. I’ve heard The Episcopal Church described as “non-doctrinal,” as if not having doctrine was a selling point. Come over here to our church. You don’t really have to believe anything to be a member! In a sense that is true. We don’t have litmus tests. I won’t ask you to sign a statement of faith. I am serious when I say, “whoever you are, wherever you are on the journey of faith, you are welcome here.” But don’t mis-hear me when I say those words. Don’t hear me say I don’t think belief has value.

The Trinity is worth believing, even though the doctrine didn’t develop until two or three hundred years after Jesus’ death. Scripture doesn’t use the word “trinity,” and these two short passages from Second Corinthians and Mathew’s Gospel are the only places in the whole Bible where the Father, the Son and the Holy Spirit are mentioned together. The early church fiercely debated, even fought battles over this idea of Trinity. They say that many of the bishops that turned up at the Council of Nicea were missing ears, eyes, or arms. They had been to war over this doctrine.

In that long reading from Genesis we heard about the “seven days” of creation. Know that I do not believe that creation happened in seven literal days. I don’t view Genesis as a Science textbook, a cosmological or geological record. Genesis is theological. Genesis is the story of God’s relationship to creation.

Did you notice the moment at the very beginning? Darkness covers the face of the earth, and a wind from God sweeps over the waters. Even in the first sentences of the Bible there is interplay in the inner life of God. Then God spoke: “Let there be light.” And immediately Christians turn from Genesis to the first chapter of John’s Gospel. “In the beginning was the Word, and the Word was with God, and the Word was God.” So in the beginning, if you splice together Genesis and John, you have God’s Spirit and God’s Word named alongside God the Creator. There is interplay in God’s life, even in the Biblical stories of creation. God is not some static stoic creator, but a dynamic relationship. And God is not done with creation, until humanity has been created.

Meister Eckhart the Christian monk and mystic once explained the inner life of the Trinity, and the creation of humanity this way:

Now, the early church teachers would have come after Eckhart with a sword because he makes it sound like God created the Son and the Spirit. Hopefully they would’ve been assuaged when he said: “it’s poetry!” In that poetry we have an image of the joy, of the laughter, of the relationship at the heart of God’s life. God is about relationship. Humanity is meant for relationship, with God, with fellow humans. We are not in this alone.

We life in a time when our relationships are strained. We can see the evidence on an ecological level. Oceans are rising. Ice Sheets are melting. Species go extinct with regularity. If God had made creation a democracy, I’m not sure humanity would when another term as leader. My vote is with the dolphins. I say that kiddingly, but the more we learn about our planet, the more we learn about an intricate balance of relationships that keeps our biosphere in motion. If we are going to survive, we have to learn to live together. To borrow a term from Eckhart, we have to learn to laugh together, to laugh together with creation, or we might be doomed.

I don’t want to lower the stakes here. I am concerned about the state of our planet. I’m worried for the future of our species. Yet, here’s my hope. This ancient belief, The Trinity, for me provides the diagnosis. We live in broken relationships, with one another, with creation, with God.

But if the Trinity provides a diagnosis, the doctrine can also give us a clue where to look for treatment.

“Learn to laugh together,” Eckhart would say.

As we were traveling down in El Salvador last week, my friend Grace made a fascinating observation. Some of you know Grace. She has a Sunday morning job at another church that keeps her away from our worship services, but she often serves with us at the Trinity meal for the hungry and she comes to evening programs. She came with us to El Salvador, and Grace had a real insight into why I, and so many people say they feel “at home” in the country. People often remark on the hospitality they find in El Salvador, it is a hallmark of the culture. Salvadorans take the time to greet you, to ask you how you are, to really listen.

Grace noticed that, among the Salvadorans, people weren’t “on edge” politically with us, in the way we seem to be with each other in the United States. When she said that, I thought, yeah.

Have you felt this “on-edge-ness”? Have you found yourself not really listening to another person, just readying your “talking points” on a particular political topic? I know I have. Have you found yourself on the receiving end? I’ve said something that set off a reaction from another person. I’ve even set off a set of “talking points” I agreed about. Someone recently tried to convince me that we need stronger gun laws, because they thought I had said something I didn’t. We are on edge.

Grace noticed, in El Salvador, the edge was off. People spent more time listening to one another, and less time correcting. Now stay with me for a moment, because I think Grace’s observation has something to do with the Trinity, with the life of God.

The Franciscan priest Richard Rohr says that “on edge” tension can be called “dualism.” We are set up, in our culture, to see “this” or “that,” “black” or “white,” “male” or “female,” “gay” or “so-called straight,” “conservative” or “liberal.” (The truth is dualism is in El Salvador as well, but sometimes cross-cultural encounters can break through). But dualism is a trap, says Rohr. We are taught to look for the other, the opposite, and to oppose. We don’t hear nuance. You are with us or against us. That tension of the two poles, the opposites, is not of God, Rohr says, at least not how we understand God in Trinity. Trinity breaks apart the idea that there are just two options. There is always a third way. We can move past dualism. What does non-dualism look lie? Like all the colors of the rainbow.

Today at church we’re wearing our rainbows. We’re standing with the thousands in Washington DC, and around the country, marching for equality for the LGBTQ+ community. Being a member of that community has also challenged me to grow past dualism. The LGBTQ+ community have been spiritual teachers for me. Every time I think I have our community fitted into little boxes in my mind, sorted into “this or that” they challenge me to expand. Heck, every time I think I know the acronym for my community, we add a letter. Now we have Lesbian, Gay, Bisexual, Transgender and “Q” (which stands for Queer and Questioning). Then this year we decided to add the symbol “+” for all the groups not named in LGBTQ. I try and keep Holy Communion on the leading edge of welcome to the LGBTQ+ community, and so I added the “Q” to our sign this year, but then I got distressed when I discovered that our letter and symbol kit for the sign outside doesn’t have a “+.” I’m sure God will forgive us this year, but I’m looking into ordering more symbols. I figure I’ll be proactive and I’ll by some emojis while I’m at it.

The spiritual wisdom of the ever expanding LGBTQ+ community is, I believe, the same wisdom in the Christian teaching of the Trinity. God is one, and yet God’s very one-ness is a dynamic diversity. Every time I think I have God nailed down, sorted, defined, God surprises me. Saying God is three-in-one, one-in-three, it is to say that at the very heart of God is a love of difference, and the ability for difference to come together in unity. God’s very life is an embrace of diversity.

The Trinity leads me to ask: What if we treated one another as equally beloved? What if we encountered difference not as a problem to be corrected but as yet another facet of God’s image? What if we didn’t set ourselves up for opposition, but listened and laughed, and added letters onto the description of our community? What if we learned to listen to creation, and to adjust our use of resources to live in better balance? What if we trusted that God was with us in this dynamic search?

Those “what if” questions for me are worth the asking, and more. Those “what if” questions may be our only way forward. This is why I think belief matters, why if you are still walking the journey of faith, I invite you to consider the Trinity. It’s not a cosmic joke. It’s not bad math. The Trinity is a description of God’s life: The triune God, diversity in unity, the loving-laughing non-dual force behind creation. The Trinity can bring hope in a world of broken relationships.

3 thoughts on “The Trinity: A Doctrine Worth Believing”