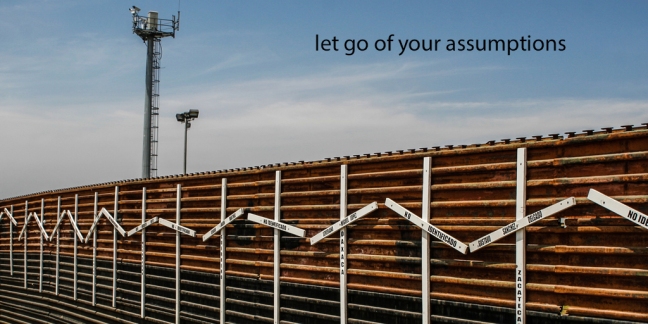 You know what they say about assumptions? (If you don’t, I’ll let you look it up later. The words aren’t fit to come out of a pulpit). Today’s readings are full of assumptions. “Surely, this strong, tall, young man Eliab is the Lord’s anointed” thinks the prophet Samuel, but Samuel learns “the Lord does not see as mortals see, they look on the outward appearance, but the Lord looks on the heart.” Samuel discovers the Lord has chosen the pipsqueak David. In Samuel’s defense, Goliath got it wrong too. Assumptions can get us into trouble. Assumptions keep us from seeing deeply.

Jesus’ disciples begin in today’s Gospel reading with an assumption: “Someone sinned, and this man had to be punished.” They assume a causal relationship between this man’s blindness and someone’s misstep, someone’s sin. That’s a big assumption. Jesus reframes. “This man was born blind so that God’s work might be revealed in him.” Jesus calls into question the whole relationship of sight and blindness, darkness and light, clarity and obscurity. Do you really see? Do you see? Are you sure?

Now I know, John milks every last drop out of Jesus’ metaphor today. That Gospel is long. We all had to stand up quite awhile for this one. You didn’t have to hold a big brass book while it was read. That book is heavy. The story is long. But I think there is value in hearing this spiritual truth from Jesus again and again: let go of your assumptions. When you think you see things clearly, look again. Are you sure? Do you have the vision all worked out?

Assumptions are dangerous. When we think we hold the truth, to the exclusion of facts, stories, and compassionate listening, we can cause a world of hurt to others and to ourselves. We all know this to be true. Many of us can recall a time when an assumption was made about us, or about our family. Many of us can recall a moment when we made an assumption and it served us badly.

A particular set of assumptions loom large in our country today, those assumptions are about immigrants. In the town where I grew up, the Latinx population was booming. As a teenager, honestly, there were a lot of jokes made in my circle of acquaintances about Mexican immigrants. The jokes masked a fear. The city was changing. The language was changing. Even 20 years ago there was a fear that the arriving immigrants were “taking jobs away from Americans.”

Now, the question of racism and ethnocentrism wasn’t exactly black and white (it never really is). My circle of friends included Latinos. Sometimes a racist joke would be told by someone with a last name like Ortiz. I could try to unpack the nuances, but then my sermon might be longer than the Gospel. Suffice it to say, the power of these assumed narratives was really strong, and they definitely shaped the way my friends and I saw immigration.

In college, I joined the tiny LGBT Pride organization on campus. Coming out at 19 was pretty early back then, especially on a Catholic campus. Joining Pride plays into my discussion about immigration and assumptions because the Pride group met in the United Front Multicultural Center. Every other grouping was based on race, ethnicity, or culture. Black Student Union, Asian Student Association, Filipinos, Pacific Islanders, Latino groups all had a space in the multicultural center.

One afternoon in my sophomore year, I was hanging out with a few of the other Pride Members by the little desk we had in the center, while the Association of Chicana Activists were meeting nearby on a circle of couches. (Chicano or Chicana is a term that some Mexican-Americans choose to identify themselves. The name connects to indigenous Mexican culture, and to the movement for liberation). As the Chicana group was meeting, I overheard a student relating a story through tears. She talked about how hard it was to fit in at our college, a majority white, majority wealthy school. Nothing overwhelmingly traumatic had happened, but she talked about the daily small indignities she faced, when someone mocked her accent, or asked if her parents were “illegals.”

Back then we didn’t have the term “micro-aggressions” to name this sort of thing, but I couldn’t stop myself listening in as she talked. On one level, I resonated. As an openly gay theology major, I often felt out of place at the Catholic college. I sometimes was made to feel out of place, by a professor saying something seemingly small and off-hand, or by a fellow student intentionally using homophobic language. Our experience was somewhat similar. But on another horrifying level, as she spoke I was becoming aware of all those jokes for which I’d laughed. I had said things similar to the anecdotes she shared, or at least I’d had similar thoughts. It was like the scales had fallen from my eyes, and I could see simultaneously that this young woman was my sister and that I had participated in causing her suffering.

That young woman and I later marched together on our campus as part of a student movement which created a new policy against hate crimes and bias motivated incidents on campus. We still talk every now and again on Facebook, when she has time. She graduated with honors and these days she’s a very busy organizer and activist in the Labor movement in Southern California. Many of you know that my experiences standing alongside Latinx people didn’t end in college. I continue to work against the narrative I inherited, but my working on my own interpersonal assumptions alone won’t cure our cultural blindness.

As a matter of policy, the United States government makes an assumption about migrants from Latin America. Unless they can prove otherwise, every person hoping to come to the United States from these regions are considered “economic migrants.” We assume, as a matter of policy, that they are coming to take a job. In 2014, a major wave of unaccompanied children and youth arrived at our Southern Border fleeing intensifying violence in their neighborhoods especially in Honduras, El Salvador, and Guatemala. Our policy automatically considers these young people as economic migrants. Officially, we assume they are lying to get into this country for a job. We make that assumption of little kids. The fastest growing group of people being apprehended at our Southern Border are children under age 12.

Back in September in this pulpit, Noah Bullock from Cristosal, an organization in El Salvador told the stories of families fleeing death threats. Not long after Noah spoke, one of my favorite students from the year I taught English and Music with the Episcopal Church in Honduras, Charly, was killed by a gang. Charly once told me he’d like to come to the US, but he knew he’d never be able to get here legally, and he was too scared to come without documents. The gangs regularly threaten and extort migrants making their way up through Mexico. Hundreds are killed every year en route to the US. Charly feared for his safety. A group of gang members killed him and his girlfriend for his cell phone and motorcycle. Our national assumptions are wrong, and lives are at stake.

The Episcopal Church is running an Underground Railroad in response. Right now. In El Salvador the church has safe houses to get people out of harms way. Cristosal petitions for refugee and asylum statuses for those who are fleeing violence. It is clear to me that the Episcopal Church in the United States should be one of the final terminals of that railroad. We should be able to welcome those who flee violence. What isn’t clear is how we can make that happen. Politically we seem unable to shake our assumptions. In the 1980s pastors were driving across the Mexican border to pick up Salvadoran refugees without papers. A lot has changed since those days. As I said, the road through Mexico has become much more violent, and our immigration enforcement has intensified. I don’t know the solution. It’s not clear to me how we connect this railroad to safety here in the US, but I think we have to ask the questions.

As an aside, I don’t want to make you nervous about the trip we are taking to El Salvador this Spring. Sometimes assumptions can work in favor of our safety as North Americans. The gangs assume that groups coming from the United States are good for tourism, a growing industry in Latin America. The violence is directed at their neighbors. They go out of their way to ensure the safety of North American travelers. Cristosal has been hosting groups for more than a decade and has never had a more serious incident than pickpocketing occur to one of their visitors. I say this, not to help my point, but to reassure our group and their families.

Yes, El Salvador is a violent place. Holy Communion is sending a group to El Salvador, in part, because we want to ask: “teach us to see.” The way to move beyond assumptions is to listen, to look, as Samuel heard, “not at the outward appearance, but [at the] heart.” We are going to spend time with our sisters and brothers. We will break bread together. We will talk about the realities we face. We are considering this relationship with El Salvador, because as Christians we believe that we can only see the whole picture when we include diverse perspectives. When we can ask another human being: “how do you perceive this situation?” and we take the time to listen deeply, to get to the heart of matters.

Can I share with you a slightly irreverent reflection on this story? I was once talking about this section of John with a youth group, and a young woman stopped the whole group by saying, “That’s disgusting. Jesus took dirt and spit, and put it in that guy’s eyes?” It helps to slow down and listen to how a young person sees the Gospel at times. Admittedly, this story of healing, of receiving sight, is a little gross.

But somehow it strikes me, that this too may hold some wisdom. If we are to learn to see the world as Jesus sees the world, if we are to see one another as sisters and brothers, if we are to let go of our assumptions about sin, about status, about race, religion, orientation and creed. If we are going to make a real change to our nations immigration policies, to become a more welcoming nation. If we are to approach one another with a little more grace, the process is likely to be messy, like mud from spit and dirt.

God’s grace is in the mess. God’s vision, it’s for those of us who often feel stuck in the mud. In fact, according to today’s Gospel, if you have been feeling a little frustrated, a little stuck, a little blind lately, well that’s good news. You’re on the right track. We are the people who believe in the God who is with us through the valley of shadow and death.  God already sees you, and loves you, better than you can love yourself. God’s works will be revealed. Let go of your assumptions.