Christmas comes as a beloved contradiction: God comes not to the protected center, but to the edge. Once in Royal David’s City, stood a lowly cattle shed. This very Victorian carol captures the tension. The Royal City holds a place so humble, and God’s power chooses to enter there. The back and forth can seem extreme on Christmas. The hymns we sing swing wide with our emotions. We jump between the quiet of Silent Night and the blasting trumpets of Joy to the World. Christmas comes to our ears as a contradiction, yet, we love the tension. We come to this service with anticipation to hear once more the message of the angels, to sing these hymns and splendid descants. We celebrate that the full glory of God enters the most humble of human circumstances. What a contradiction.

As I prepared to preach this night, I was stopped in the first verse of our Gospel by the character Augustus. “In those days a decree went out from Emperor Augustus, that all the world should be registered.” Caesar Augustus was great-nephew of Julius Caesar, and his adopted heir. Augustus is considered Rome’s first Emperor. Augustus’ rule marks the end of the Roman Republic. He was famed as a builder of roads and cities. Augustus himself joked that when he rose to power “I found [Rome] brick. I left it marble.” As the adopted son of Julius Ceasar, he was given the title “Son of God.” Augustus was a fitting name, at least in the emperor’s own mind.

Coating your capital in marble is expensive, so the Emperor declared a tax. That is how the King James Bible translates this first verse of Luke’s second chapter. “a decree went out…that all the world should be taxed.” Augustus registered and taxed the whole known world. And so Mary and Joseph make their way to Bethlehem, to Royal David’s city and find themselves at the manger with their new son. God appears in human history, not in the halls of centralized power, but on the edge of civilization, surrounded by a motley crew of shepherds.

Luke likely included this story in part, to give us some exposition. When did these things take place? In the reign of the first Roman emperor. Surely you’ve heard of him. Jesus’ contemporaries knew that the wider world would need a sense of context. The preacher William Sloane Coffin once said that If you took a gallup poll there is no question which figure would have been estimated more significant: The august emperor or Jesus, the baby in the manger.  And yet what a sign of hope for humanity: While the marble of Rome lays in ruin, here we are this night, celebrating Jesus’ birth.

Christmas contradicts human logic. Allan Rohan Crite, the famed black Episcopalian artist’s image of the Mary and Jesus is on the cover of your bulletin. Crite captures the contradiction well. Mary and Jesus are drawn with curves and ovals, the soft center in the midst of the hard ramshackle lines forming the city around them. Crite’s is not a traditional nativity scene, no mighty angels, no peaceful snowy fields, no bright star. In the image on your bulletin, the angels give way to the humble stoop in a rough neighborhood. But even there mother and child share a loving gaze. God incarnate is held by Mary on the edge of town, in the dangerous street. 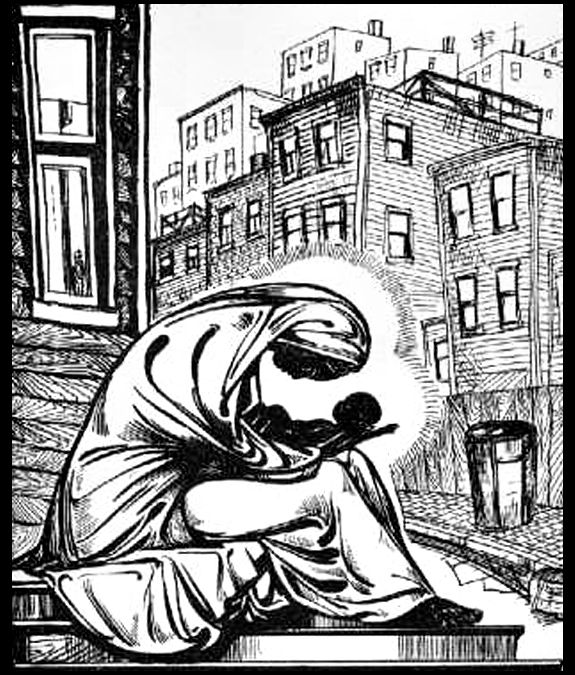 The story we tell this night is not far off the artist’s rendition. Jesus is not born in the Royal Hospital. God comes in flesh, not in the Imperial palace of Rome, or even in the provincial capital in Jerusalem. God comes on the edge, on the edge of the edge, the margin of the margin, and still there is no room.

One of the most meaningful liturgies for Christmas I’ve ever attended involved a long walk. A decade ago I was living in San Diego, California. A college friend invited me to the Border Posadas. Church groups from San Diego and Tijuana, Mexico were to meet on either side of the border fence, just a few yards from the Pacific Ocean. The Posadas celebration comes from Latin America. Traditionally a procession forms, moving from house to house. The people, like Mary and Joseph, ask for room in the Inn. They are turned down at house after house, and so the procession continues until it comes to the designated home, or to the church, where at last they are given room and the party begins.

That December the air was cold, well, cold for California. The Border Patrol, in a measure of crowd control, locked down the parking lot nearest the border fence. So those of us who wanted to participate had to walk about a mile on the sandy beach paths down to the fence. Some of our fellow travelers were filled with anticipation. There, on either side of the fence, they planned to reunite with family members. Because their immigration status might be in question, or their loved onemight lack a visa, crossing the border was out of the question this Christmas. These folks trudged through the sand with smiles and little gifts to pass through the fence, if they could sneak them past the guards. When we arrived, we sang Christmas Carols in English and Spanish. We read Scripture. We prayed, one congregation, separated by the border. Hearing the refrain “there is no room” up against that menacing fence, made the contradicting message of our story all the more poignant. Humans failed to make room for their creator. In the words of John’s Gospel: “[Christ’s] own people failed to recognize him.”

Mary and Joseph didn’t choose their journey, following Luke’s story. The Emperor Augustus’ decree meant they were forced to travel. The registry was required. Mary was heavy with child, and the journey could not have been easy.

On a clear day today, you can see the edge of Bethlehem from the hills of Jerusalem. Royal David’s City is made visible by the huge border fence constructed by the modern State of Israel. Bethlehem is Palestinian territory. During my pilgrimage we crossed over to see the Church of the Nativity. The journey reminded me of my trips to the US/Mexico border. The guards in Israel wore similar uniforms to US Border patrol, and they carried almost identical weapons. You have to go beyond the guards, beyond the wall, to find the place where Jesus was born.

Leaving behind a sense of safety can feel like a contradiction. In my travels I have passed by border patrol agents and militarized walls, barriers built to keep people like me safe, I have thought in my gut “Would my mother really want me to leave this cordoned safety?” (I’ve talked with her since, and her response is mixed).

In the midst of this contradiction, on the edge of the respectable, outside the centers of power, Christ comes. God comes to us. Emmanuel, God is with us, in the most dire of human circumstances. This is good news.

Out on the edges, out beyond what we can control, in circumstances that Mary and Joseph surely did not choose, Jesus was born. Tonight, thousands of years later, we celebrate the Love of God coming to transform our world, to transform our lives. And in Scripture we hear once more the message of the Angels, a message which can feel like a contradiction: God comes to the edge.

As a priest, I’m privileged to spend some edgy moments with folks. I’m invited to stand by hospital beds, and to negotiate with landlords who have handed out an eviction notice. Parishioners ask me to walk with them in protests, and to pray with them after a loved one has died. Those of us who are clergy are privileged stand as witnesses as God continues to come to the edges of human life. When we are at our worst is often when God breaks through.

I have also had the privilege to witness those “creative edges” that change life. I’ve celebrated with entrepreneurs as a little side project became a full time job. I’ve walked with folks as an unexpected friendship blossomed into romance. I have witnessed vows to “love, honor, and cherish” a spouse. I’ve seen college students discover a passion and launch into a career. Often the moments of clarity come not in the carefully controlled center of our lives, but out on the creative edges. The edges are God’s territory.

And so this night, we wait silently. We light candles against the dark. We stand as witnesses to the persistent work of God, the continued blessing of the edges of life, even this year, especially this year. And this night, we shout loud hosannas. We proclaim with all our might “Joy to the World. The Lord has come.” Tonight we embrace the mystery of Christmas. We celebrate a contradiction we may never fully comprehend: God loves us, and God comes to redeem us from our own sense of control. Merry Christmas. Amen.