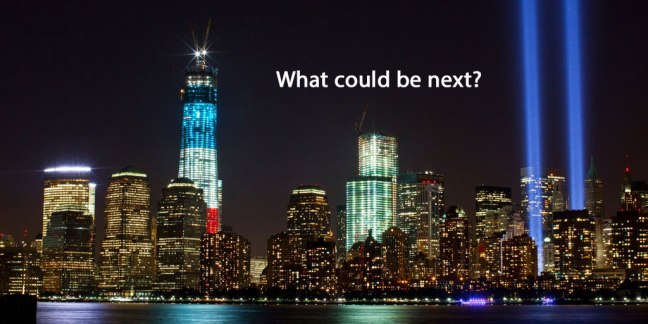 An entire life can change in a moment, and certain moments can change an entire culture. I would guess that almost everyone in this room remembers where they were when they heard that planes had crashed into the World Trade Center and the Pentagon. Many of us remember the news, and the stunned silence of the days following.

Most of you know that I worked at an Episcopal church just across Lafayette Park from the White House before I moved to St. Louis. I came to St. John’s 10 years after the attacks, but when I was there, the staff and community were still talking about the days that followed. Particularly, they remembered the first service that St. John’s was allowed to hold afterward. Being that close to the White House meant that, for security reasons, no one was allowed into the church for several days. The blocks and office buildings all around the White House were cordoned off. 9/11 was Tuesday, people returned to work on Friday.

St. John’s holds a daily Eucharist at 12:10 for the folks who work in downtown DC. On a regular weekday there are 10 or 15 people in attendance. On Friday September 14, 2001 something like 1,000 people came to pray. The church only seats 800 or so, so people were seated in the aisles, and crowded round the outside doors.

I’m not sure what the text was preached that day, but our reading from Jeremiah would have fit well. As I noted last week, in the English language we use the word “jeremiad” to describe a long lamenting scolding speech. After our reading today, you can understand why. “A hot wind” comes after God’s “poor people.” The destruction that Jeremiah foretells may seem familiar to us. The quaking of the earth, the desolation of cities, this text could have been preached on that September day 15 years ago.

The task of prophets is often misunderstood. We tend to think of prophets as holy prognosticators, sooth-sayers. We imagine prophets predicting the future for kings. But that’s a slippery slope, and we might think they could tell young maidens when their prince (or princess) will arrive. We can misunderstand the prophets as God’s fortune tellers. Then we read their words and we think of them as really grumpy fortune tellers. But that was not exactly their role.

Jeremiah didn’t need a crystal ball to see what was ahead for Israel. Josiah the king was full of himself. Josiah was the head of a small kingdom, and he was the kind of guy who liked to poke the bear, politically speaking. Babylon was a growing empire to the North. Jeremiah had a sense something could go terribly wrong.

The task of prophets has two parts, the first is to unsettle a society. The prophets tell us, “Don’t get too comfortable.” Something is amiss. The prophets call people back to God’s law, back to justice and mercy. The prophets point out the uncomfortable hypocrisies of their day. Unsurprisingly, the prophets often don’t fare well.

But the prophets have another task, besides pointing out the nation’s sins. Prophets help us to imagine what could be next. That is the role of prophecy in Judaism and Christianity. Prophecy helps us imagine another way of living. Prophecy helps us move from lament toward rebuilding. Prophets help us imagine what could be next.

The whole land will be a desolation; yet I will not make a full end.

That Friday 15 years ago, life started to move back to normal patterns. And people were hungry for the prophetic transition. We went back to work, or to school, but I can remember several conversations with my friends and neighbors in the weeks that followed and they all centered around the same question. As we realized we hadn’t reached “a full end.” As we moved into this new reality, we were all asking: what will be different? I have a hunch that’s why all those people showed up for church. We were ready to get back to work, but we had a sense that something had to be different.

15 years later, I wonder what is different. We’ve tightened airport security. We’ve fought wars. We’ve survived more terrorist attacks. I wonder if we have yet fully let go of 9/11, if we’ve been able to step back a little from the edge. Tempers still seem to simmer, and racism seems to be on the rise since those days.

There’s a story coming out of North Dakota this week that is giving me a great deal of hope. A protest over an oil pipeline crossing ancestral Lakota lands might not seem a long way from threats of terrorism coming from the Middle East, but scratch the surface even just a little and you see questions in Middle East policy are bound tightly to questions about oil. The conflicts we encounter involving religion and race are also tied to questions of resources.

Over the past several weeks diverse Native Americans from across the continent have been gathering with the people of the Standing Rock reservation to protest the construction of the Dakota Access Pipeline, a pipeline that would start in North Dakota and pass between St. Louis and Springfield, before terminating in Central Illinois. Some of these tribes hold ancient grudges against one another. There were wars between Native Americans long before European settlers arrived, but this week the tribes have come together in support of Standing Rock. People are describing the camp as peaceful, hopeful, and fun. They are sharing food and good conversation. In a tense moment, some protestors were detained because the police thought they were talking about pipe bombs. Turns out they were getting out peace pipes. You can’t make this stuff up.

And the Native Americans have been joined by other young activists from around the country and around the world. Black Lives Matter organizers from St. Louis are up there in North Dakota right now. In their statement, they made a connection between drinking water in North Dakota and the lead contamination in Flint Michigan, which overwhelming affects black families.

Historically the sites for environmentally hazardous projects have often been located in the backyards of people of color and in the lands of Native Americans. The Standing Rock lawsuit asks why the pipeline was moved away from its originally proposed site closer to Bismarck, the capital city, which is 92% white. Native Americans have seen mining and pipeline projects pollute water for generations. Years ago the Native writer and politician Wynona Laduke asked:

“Someone needs to explain to me why wanting clean drinking water makes you an activist, and why proposing to destroy water with chemical warfare doesn’t make a corporation a terrorist.”

She points out a difficult truth about the world that we live in. We are, all of us, culpable. We are literally invested, most of us, in oil companies, in polluters. Elementary school teachers and librarians, through their pension plans, own stock in weapons manufacturers. For the past few months we’ve been saying a confession here at church, unfortunately we’re not saying it today because we just changed the liturgy, but we’ve been saying it for months: “We repent of the evil that enslaves us: the evil we have done, and the evil done on our behalf.”

In 2016 “The evil done on our behalf” covers some mighty big bases. Our lives are caught up in deeply rooted and wide reaching systemic injustices. In response we could try and totally isolate ourselves from the system. We could go off the grid. We could ride bikes all the way to North Dakota, to avoid using fossil fuel, and we could try and live off the land. Well, you can do that. I don’t do well in the cold. Ask Ellis.

If we are going to choose to live in the culture, we have at least two ways of going about our lives. We can keep our heads down, consuming what we are told to consume, and not asking questions. Or, we can become critical consumers. We can ask questions about where a product came from, who raised our food. What were they paid? How are our choices affecting both the people and the planet? We can supplement our consumption by growing some of our own vegetables, or by buying them directly from a farmer. We may not be able to stop a pipeline entirely, but we can ask, “does it have to come so close to my neighbor’s drinking water?”

Back in 1977, in his book “The Unsettling of America,” Wendell Barry, the poet/farmer, and cultural critic, asked:

How could we divorce ourselves completely and yet responsibly from the technologies and powers that are destroying our planet? The answer is not yet thinkable, and it will not be thinkable for some time—even though there are now groups and families and persons everywhere in the country who have begun the labor of thinking it.

One day our future will look incredibly different. I believe gatherings like Standing Rock should give us hope. When we can cross racial lines, religious lines, ethnic lines. When we can break bread together and laugh together, and protest together we begin that important labor of imagining the not yet imagine-able.

That is the real scandal at the heart of the Gospel this morning. The world around Jesus, represented by the Pharisees, can’t understand why he would break the taboos. Why would he cross the cultural lines? Why would he share his table with sinners?

As usual, Jesus tells a story to engage his opponents’ imaginations. God isn’t counting who is in and who is out, Jesus says. God is out on the road, looking for the lost sheep. God is too busy searching for the lost to notice these differences you obsess about. God is busy finding those who feel unloved, who feel alone. Those who you count out, God celebrates.

Fifteen years ago felt like desolation. Yet it was not a full end. Sometimes in life we all face moments that change us. We all face those times that irrevocably change our reality. Usually we can’t change the circumstances. It is the job of our faith, the job of the prophets, to help us to ask: “what can be next?”

3 thoughts on “What could be next?”