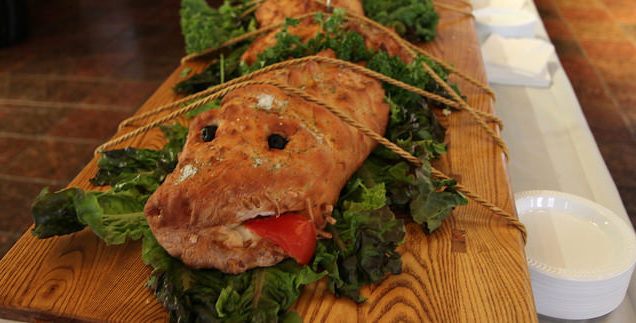 The exercise of faith may appear a little silly at times, but often, if you peel back the layers a bit, you will find very serious hope, a hope that can transform the world. Let me give you an example. Yesterday was the feast day of St. George, the patron saint of England, and thus a celebrated figure in many an Episcopal Church. We know very little about the historical life of St George. He is said to have been a soldier in the Roman Army, put to death for defending Christianity to the Emperor Diocletian.

But, if you’ve heard of George you probably know him better for slaying dragons. The church that sponsored me for seminary, St. Paul’s Cathedral in San Diego, had a St. George’s day festival every year. There was a service of Evensong, with a procession of bagpipes and drums through Balboa Park. One year in college, I television cameras spotted me in midst of the procession. I was walking in a white robe and swinging a pot of incense in front of a giant loaf of bread, baked in the shape of a dragon. After the service, the dean or bishop would cut off the bread dragon’s head with a sword. I thought to myself as I saw the news crew, “what are my friends in the dorm going to think of me now?” Well, it was probably a moot point. The jig was already up, even then. But I wondered what this affair in the streets looked like to outsiders. As I said, faith can appear a little silly at times.

I confess, I loved this service when I attended the Cathedral. I grew up reading stories of Merlin and King Arthur. I loved the Disney movie “The Sword in the Stone.” As I grew older, the love evolved a bit, but I will confess that I am still a bit of an Anglophile. I love Harry Potter and I toasted the queen’s 90th birthday this week. I have a predilection for almost all things English, so this very English dragon-slaying church service made me smile.

There is one hymn that always always has to be sung on St. George’s day. The hymn is almost a second national anthem for the country. The words are a poem by William Blake:

And did those feet in ancient time,
Walk upon England’s mountains green:
And was the holy Lamb of God,
On England’s pleasant pastures seen?

The poem refers to another English legend, this one is not about England, but there is a story that Jesus himself lived in England. You know those 20 or so years that we don’t know about in Jesus’ life? The years between when he gets lost in the temple as a boy, and his baptism as an adult by John? Well, if you ask the English, Jesus was living near Glastonbury. Hiding from the Roman army, and working with tin-merchants trading between Palestine and England. As I said, faith can appear a little silly at times, and that may be particularly true in our Mother Church, the Church of England, and also of those of us in The Episcopal Church who go in for this dragon-slaying love of England.

If any Christians are well prepared to read the Revelation to John, it may be us Episcopalians. I mean, there be dragons in this book. Yet, if we were to take a survey of this congregation about your favorite and least favorite books in the Bible, my bet would be that Revelation would be close to the bottom of the list. Am I wrong?

I’ll admit, the last book of the Bible is difficult to read. There are a lot of obscure references, discussions of confusing visions, angelic armies, beasts, and anti-christs. Revelation is not bedtime reading.

Part of the difficulty we have with Revelation, we may have generally with the Biblical genre of prophecy. Prophecy is not the telling of the future as it will be. There are many churches that teach Revelation this way. When I was in college, a preacher was telling people that Colin Powell could the the Anti-Christ predicted in the Revelation of John, because Colin Powell might bring peace in the Middle East. The preacher read the Bible and the newspaper, and he was convinced John knew about Colin Powell. I happen to know Powell is an Episcopalian. I’m not sure whether telling this preacher that would have convinced him that the Secretary wasn’t going to start writing 666 on people’s foreheads. But I will tell you today, the end times didn’t come when I was in college. I’m pretty sure Colin Powell wasn’t predicted by the Bible.

We are confused about the genre of prophecy today. Some of the best scholarship on the Book of Revelation ties the allegorical stories of John of Patmos to specific events, but not events in our time. John was writing about his own time. At least one of the dragons is thought to represent the emperor Nero, who burned Christians alive and may have set Rome on fire to make room to expand his palace. John’s stories were meant to help Christians see their violent persecution in divine terms. Prophecy is not prognostication. Prophecy is telling of a future that might be, in order to illuminate the injustices of the present.

The image we have today from Revelation makes all of the dragons worth fighting. The Holy City seen by John, the image of the New Jerusalem, is the object of hope at the heart of the prophecy. This New Jerusalem is the destination, a dwelling with God. And God will wipe away every tear.

The earthly task, they say, of good Jewish people (and I might add, of Good Christians as well) is to build up the earthly city until it reaches the level of the spiritual city. The task of faith is to raise those streets up, to lift up the earthly until it reaches the holy. This is a task that goes on each and every day. When we reach out a helping hand to someone in trouble, when we respond to hatred with love, when we act with patience and kindness, when we “love one another” as Jesus invites us today, the earthly city reaches upward.

I heard this story from a Rabbi friend in Washington while we were organizing around a sewer system. We weren’t physically in the sewers, we were actually standing in a mosque. In DC I was part of a group of clergy and lay people called the Washington Interfaith Network, and we organized together around common work for justice. The Environmental Protection Agency had demanded that Washington DC spend close to three billion dollars updating its storm sewers, to prevent sewage from flowing into the Potomac River. We agreed with that goal, but we had another goal. We wanted this effort to hire unemployed and underemployed residents of DC.

William Blake’s poem is commonly known by the name of the hymn tune to which you sing his words: “Jerusalem.” The final stanza goes like this:

I will not cease from Mental fight
Nor shall my sword sleep in my hand
till we have built Jerusalem
In England’s green and pleasant Land.

And, in John, the hope is greater than simply human endeavor. For in his vision, the heavenly Jerusalem is brought to us. It is not our effort, but God’s that brings about the New Jerusalem. This reading from Acts is one of my favorite. In the story Peter finds himself on a rooftop. He’s heard a word from God that he is to preach to the Gentiles, but he seems uncertain. He learned to stay away from those outside his ethnic group. He’s got categories and prejudices, and he believes they are sanctioned. In a dream, an angel brings down all manner of food he is not supposed to eat. Peter is shocked. “Never have I let anything profane pass through my lips” he tells the angel, but still he is commanded to eat. “What God has made clean, you must not call profane.” Peter interprets the vision beyond food. He understands that God is asking him to let go of his categories for human beings. God is inviting him to a more inclusive vision. He goes to tell the other apostles, and at first they are shocked. As they hear the story of how God is moving among these outsiders, they are moved. Peter finally says “who was I that I could hinder God?”

The New Jerusalem belongs to God, and defies all of our categories and exclusions. God’s vision of humanity lifted up to the heavenly city is a welcoming and inclusive vision, of all the peoples together. We need God to realize this vision of reconciliation. Our own vision won’t do. We need God’s city to shed light on our city. Only by collaborating with God will we reach Jerusalem. And we’re going to have to wrestle some dragons.

The writer GK Chesterton once said: “Fairy Tales are more than true” more than true, “not because they tell us that dragons exist, but because they tell us that dragons can be beaten.” We live in a world where their be dragons: poverty, oppression, brutality, violence. Some of us face personal dragons of addiction or depression. I could never name them all. But we belong to a faith that believes in dragon slayers. Happy St. George’s day.

The book of Revelation with all of its allegories and metaphors can seem daunting. Some Christian interpretations of these prophecies are just downright silly. But at the heart is a prophecy can we find a central faithful hope? We live in a world where we witness great suffering. We all face loss and death. But John’s prophetic word is that the pain will pass. Death does not have the final say over life. God is the beginning and the end, the alpha and the omega. And God will wipe away every tear.

One thought on “St. George and the Book of Revelation: There Be Dragons”