Life is full of surprises.  I know I surprised some of you this week with the news that I’ll be leaving St. John’s to accept a new position.  We’ll have time to say goodbye before my last service here on January 12th, so I’m not going to say goodbye now.  I want to talk about Joseph, and all of the surprises in this passage.

We have come to the fourth Sunday of Advent, that last very pregnant pause before Christmas.  Pause a moment.  We all think we know the Christmas story so well.  Angels, shepherds, the stable of an inn, the manger.  Well, sure, that’s Luke.  We read Luke’s Gospel two out of every three years during Advent, because Mark doesn’t include any of the birth stories about Jesus, and Luke is so pretty.  Luke is the Disney version.  We’ll read Luke on Christmas Eve and on Christmas morning, because Luke’s version is classic.  We know it.  But because this is the off year in the cycle, this year the Advent readings are from Matthew.  You all can handle Matthew.  You are the proud few churchgoers who come to a service on a Sunday two days before Christmas Eve.

The story of Joseph is a story of surprise.  My partner Ellis and I were talking about this reading in the car the other night.  Ellis said, yeah, this is a story of surprise: “Surprise!  Joseph, Mary is pregnant, and the kid isn’t yours.”  What a thing for an angel to say.  How awkward for Joseph, for Mary.  What would people say?  Does he tell his friends that the kid is his?

I think we sort of glaze over this moment in our manger scenes.  The incredible awkwardness that Mary is pregnant, and it is not by Joseph, her husband.  As Robin Williams once said in a stand-up routine, Mary’s excuse is one that could only be used once.  No one would get away with it again.

Robin Williams can spin it for comedy, but can you imagine?  What a surprise, what an awful surprise.  The story is awkward, and I think we need to sit with the awkwardness for a moment.  Mary and Joseph found out Mary was pregnant before they were married, and the baby wasn’t Joseph’s.  In the midst of all our carols and candy canes, I think we owe the process of Advent, the process of preparation a moment to hold on to that awkward news, to hold on to the uncomfortable surprise. 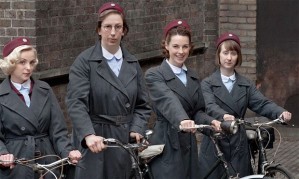 One of my favorite shows this past year was “Call the Midwife.”  There is a scene in the third episode of the first season that really captures the awkwardness of Mary and Joseph and Jesus’ paternity.  If you didn’t see it, Call the Midwife is a show from the BBC that aired on PBS.  The show is set in the 1950s and very English very privileged very white young women are riding bicycles around East London delivering babies and living with a group of salty Anglican nuns, an order of midwife nuns.  Beautifully British.  Every week is a different set of babies.  Week three we meet Ted and Winnie Lawson, married who are doing relatively well economically for East London.  Ted is obviously in love with his bride and excited about fatherhood.  He has worked hard to provide a safe home for his wife and baby.  Winnie Lawson, Ted’s wife is a bit distant.  As she gives birth we learn she is terrified that the baby will be black.  Ted and Winnie are both white.  Winnie says that before she knew how good Ted was to her, she had one moment of infidelity.  Now she is scared the baby will be black and Ted will leave her.

Ted is waiting outside the delivery room.  After an agonizing birth, the baby is born, and the little boy is indeed black.  The doctor goes to invite in the husband.  Ted pauses when he sees the boy.  Then he sits down, and asks to hold the baby.  There is a long pause as Ted looks on the little boy, plays with his fingers.  Finally he says, “I don’t reckon to know much about babies, but I can see how this is the most beautiful baby in the whole world.  What’re we gonna call him?”  He then names the child Edward, a family name.  “My son Ted,” he said.

The surprise is the grace.  Remember, the scene takes place is the 1950s.  Ted is a white man who is richer than his neighbors.  The unjust structures of race and gender and wealth all make Ted the powerful person in that room with the child and its mother.  The surprise comes because Ted, the hegemon himself, looks upon a little black baby and say, “my son,” gives him his name.  We don’t expect that grace.  You would never expect Joseph to do the same with Jesus.  Joseph has all the power in his situation with Mary as well.  That is the real surprise.  In a terrible, awkward, terrifying, humiliating situation, grace comes as a surprise.

We don’t have enough of that grace in our families.  Did you know that you can now buy a paternity test at Walmart?  When I saw that paternity tests were at Walmart this last week, my eyeballs just about fell out of my head.  It wasn’t just that the tests were FOR sale that surprised me, it was that they were ON sale…  I saw that particular rollback, and I imagined someone saying, “I’m gonna prove you are the father of this child, just as soon as they knock another 43 cents off that price.”

I’m making fun, but I know that my surprise comes from a place of privilege.  I know that I was incredibly lucky to grow up in a place where “child support” was not court ordered.  I know that I was lucky that “child support,” for my dad, meant reading to his kids.  I hope we can work for a world where “child support” means something different, means reading to your kids, going to tee-ball games, and suffering through middle school band recitals.  I think, as Christians, we are invited into working to transform what “child support” means for more families.  So many of our parents need more grace.  So many of our families need more grace.  For too many people in our city, pregnancy is a terrifying surprise, parenthood is something that needs to be proved. There are economic impacts to becoming a father unexpectedly.   It’s true today, and it was true in the time of Jesus.

Which is why it is so surprising that Joseph listens to the voice of that angel, that Joseph sticks around, marries Mary, and adopts Jesus.  And we need Joseph.  I want to say Jesus needs Joseph, but I don’t think that’s exactly true.  I don’t think a child needs some formula of a father and a mother.  I think a child needs love, and where there is love, there is family.  Jesus would have been Jesus whatever Joseph did.  The grace-full surprise is that Joseph sticks around.  Joseph chooses grace.  Joseph chooses to love Jesus and Mary.  Joseph takes a terrible situation and turns it into a moment of grace.

We all could do with a little more Joseph in our lives, a little more unexpected grace.  As I said before, I think families especially need a little more.  That’s true for the poorest of families especially, but it is also true for families who have resources.  Over thanksgiving, my sister Beth and her husband Corey surprised us with the news that Beth is expecting a baby in June.  This is the first time one of my siblings will become a parent.  Ellis and I really excited to be uncles.  After Beth, my sister, told us over Skype I found myself surprisingly anxious and so after the Skype announcement, I called her later at night on the phone.  We talked for another hour.

The anxiety I felt that night for my sister really surprised me, and the anxiety continues.  All of the sudden I am aware of all of the advertisements and news stories out there for expectant parents, mothers especially, all of the advice.  I can’t believe how many Baby Einstein DVDs Beth is going to need to make sure her child gets into Stanford.  She’s going to have to watch my niece or nephew like a hawk and follow a meticulous calendar about which food the baby can have when.  They have to pick out just the right car seat.  If you follow the Today show, there are so many mistakes young parents can make.

I think the story of Joseph is an invitation to hear that life doesn’t always go according to plan, and grace is to be found in the detours.  Joseph’s surprise lets us know that God is most readily found in the most vulnerable situations.  We need a little more Joseph in our lives, because the story of Joseph is the story of surprising grace.  New parents especially need Joseph, to know that when something with the baby doesn’t go according to plan, it can still be ok, it will still be okay.  Some of the best surprises come at moments when we seem to be pretty far off the plan.