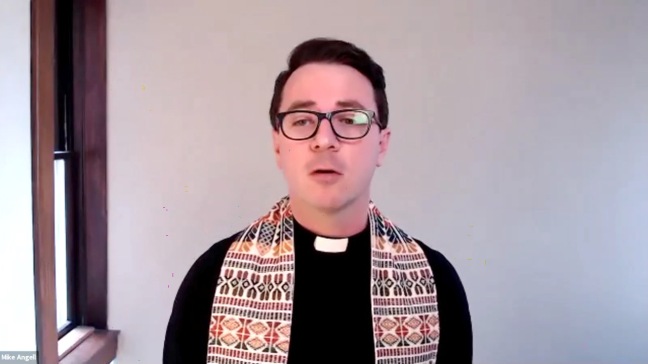 A few years ago Peter Senge, the MIT professor and Brian McLaren the Christian writer were killing time on a video chat, waiting for someone else to join, how many of us know this space today. McLaren asked Senge about the decline of the church and the growth of Buddhism in our country.

Senge said, “I wonder if Buddhism is so attractive because, at least here in the West, Buddhism presents itself as a way of life, while Christianity portrays itself as a system of belief.”

A way of life.

Today Jesus tells his followers, “I am the gate.” A few chapters earlier in John Jesus said, “I am the way.” That comes in response to Thomas, who is worried about how the disciples will follow Jesus after he leaves them. “How will we know the way?” Thomas asks. Jesus responds, “I am the way.”

What if we thought of Christianity less as a system of belief, and more as a way of life? What does it mean to live a Christian way of life in a pandemic?

Two images of church from an earlier pandemic:

I’ve been reminded by some of my elders in the LGBTQ+ community that this isn’t the first pandemic folks have endured. I want to share two images, both of them from Christian Cathedrals, both in New York City during the AIDS pandemic. I’m going to put them up on the screen.

The first image comes from St. Patrick’s Roman Catholic Cathedral, in midtown. The archbishop in the late 80s, Cardinal John O’Connor, often preached during the worst days of the disease about his system of belief, his so-called Christian opposition homosexuality. The iconic image of the Cathedral we have from the time happened in late 1989. In the church on a Sunday 111 activists were arrested for staging a “die in.” During the mass, in response to the preaching, they stood up and shouted, “you’re killing us,” before laying in the aisles.

The second image comes from the Episcopal Cathedral, St. John the Divine, a little farther North, in the Morningside Heights neighborhood. St. John’s is across the street from St. Luke’s hospital, which during the early days of HIV/AIDS would often take patients other hospitals refused. The Episcopal Cathedral had a similar reputation. They were know for they way they prayed with folks others refused to come near, for the way they advocated for funding research and treatment. The of St. John the Divine’s response to HIV is their AIDS chapel with a huge silver altarpiece. The altarpiece was the last major work of the artist Keith Haring. It’s one of my favorite works of art. His typical stick figures stand in for Jesus and the Angels. The whole thing seems to dance. Joy and hope, even in the midst of disease. Haring’s foundation donated the work to The cathedral after the artist himself died from complications of AIDS, in thanksgiving for the way the cathedral responded to the pandemic. 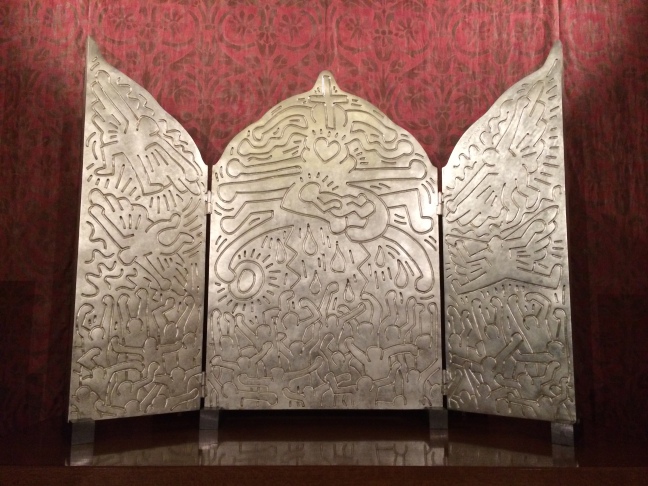 I don’t share these two images to contrast the Catholic response and the Episcopal response generally. I know there were Catholic priests and nuns and lay folk who did incredible work during the worst days of HIV/AIDS. And there were Episcopal clergy who preached some pretty homophobic sermons in those years. But the contrasting imagery of the two New York cathedrals highlights what is at stake in a pandemic. One congregation was known for proclaiming its beliefs. The other was known for the way it lived its faith.

When they write the story of these years, what images of the church will they use to illustrate the pages? Will our faith be remembered as a contest of ideas, or a way, a way of getting through, a way of treating one another, a way of living in these days?

The fourth Sunday of Easter is often called Good Shepherd Sunday because we traditionally hear a story about the Good Shepherd. We read the 23rd psalm. That psalm is always being recited in hospitals, and right now by priests with folks over the phone who are dying physically alone during this pandemic.

We know something about “yea though I walk through the valley of the shadow of death” these days. To be honest, the shepherd image isn’t my favorite image from Scripture. I have sympathy for the prayer in the new Reformed Jewish prayer book that says, “my Lord is not a shepherd, and I am not a sheep.” Today, I’m glad the Jesus mixes his metaphors. Jesus ends his story by saying “I am the gate.” I am the way through. I am the way out.

One more thought, before I leave you. Jesus ends by saying, I am the way through, I am the gate. But he begins by cautioning the disciples that thieves will break in to try and steal and cheat. Remember Jesus also lived in a time of crisis. The Roman occupation of Palestine was not well-received. There was a real threat of political revolution.

Hold on to the Letter from’s words about Jesus. Part of the reason we’re doing this study of Marcus Borg’s book about the heart of Christianity is to recover what Borg called the “pre-Easter Jesus,” the real human being who walked our earth. Borg tells us that we have to hold on to the full humanity of Jesus because Jesus shows us what is possible. Peter notices that the fully human Jesus did not reply to insults with insult. He did not respond to those who caused suffering with threats of revenge. Jesus, in the midst of crisis, offered a way of restraint.

It’s easy to point out how politicians are getting it wrong, but there’s something on display publicly that we may also locate in ourselves personally. In a crisis, how many of us tempted to demonstrate our ability to act, to prove to others, to ourselves that we can get something done? There’s some danger in thinking of Christianity as “a way” because we might think of our faith as a series of actions, as a to-do list.

The writer Sue Monk Kidd has said, “To know exactly where you are headed may be the best way to go astray. Not all who loiter are lost.” From what I know of Jesus, he wasn’t often in a hurry. He spent time just being, being by himself, being with the wrong people. Jesus didn’t rush, and we are in a time when not rushing is important.

Sometimes the best decision is to wait and to watch. We often celebrate heroic actions. We could use some awards for heroic restraint. (I know, it would be hard to figure out how to nominate someone). But the folks who choose to exercise restraint, the folks who slow down and focus on how they show up more than what they do, they might be the folks who save the most lives.

Shepherds carry rods and staffs mostly to hold the sheep back.

In the end much as I may not resonate the image of the Good Shepherd, there is a reason the 23rd psalm is so loved. “Yea though I walk through the valley of the shadow of death, I will fear no evil; for thou art with me.” When the rest of the psalm is so beautiful, so bucolic: still waters, green pastures, overflowing tables, isn’t it telling that the line we remember is the one line in the psalm that tells us that God will be with us, our guide on the way through the darkness?

If Christianity is to be lived, to be practiced as a way of life, know this: You don’t walk alone. Pray for me, and I will pray for you, that God will keep us together on the way.