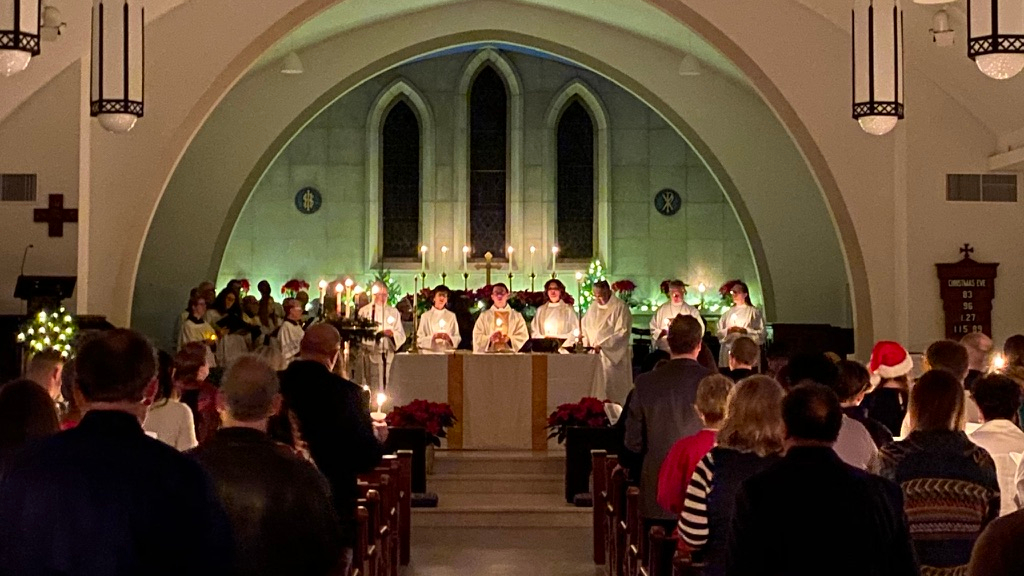 This Christmas, Pay attention! The word in Greek sounds a lot like one of Silas our 14 month old son’s babbles: “idou!” Idou! The King James translation says, “behold.” “Fear not, for behold, I bring you good tidings of great joy.” Our translation tonight renders the angel’s word as “see.” “See, I am bringing you good news of great joy.” Tonight, I would invite you to take a pencil, and scratch out the word “see.” Above it, write out the more literal translation of the angel’s word idou. “Pay attention!”

Silas coming into our lives has meant I’ve been thinking a great deal more about attention. Anyone who has spent time with an almost one and then one year old can tell you, it’s not for the faint of heart. Just to keep him alive, I have to pay attention to outlets, to the dog’s water bowl, to whatever it is he has gotten off the floor and into his mouth this time. But that’s not the kind of attention, that frightened anxious attention I’ve been thinking about for this Christmas homily, thanks to Silas.

A few months ago, on a morning when I slept in a little later than usual, and I didn’t get my morning prayers in before Silas woke up, I found myself with the little guy on my lap, as I read the morning’s psalm. This was a few months ago, when he was still more of a baby than a toddler. He had a bottle in his mouth, and he was pretty content, quiet. I found myself just holding him, in the silence after the psalm. We watched one another, just watched. We were attentive, present, to each other, without having to do or say anything. He was quiet in my arms, and I found myself awake to something between us, and I found myself wondering about Mary, Joseph, and those shepherds gathered round. There is something miraculous about being so attentive to a quiet little one.

This Christmas, how will you pay attention? Will you heed the voices of the angels? Will you allow your heart to be moved from fear?

Attention is a commodity in our world today. I wonder if anyone has timed out how many minutes of each day I spend watching advertisements as I scroll through my phone, my computer, my television, the gas station pump. Attention has been quantified, counted, sold by the second. Technology just gets better and better at holding your gaze.

One of my favorite Christian writers is a Roman Catholic Franciscan named Richard Rohr. I heard Richard speak in Oxford, England a few years ago, and he talked about an important realization he’d had. Richard lives in Albuquerque. If you’ve spent any time in Northern New Mexico, you know about the sunsets. Most every night the sky in that whole region turns improbable shades of red, orange, pink and violet. The stone of the mountains looks like watermelon. Richard spoke about a recent evening when he caught a glimpse of a particularly vivid sunset out his window as he was watching the evening news. “I realized” said Richard, “that I was missing an important cosmic event. I turned off the TV and walked outside.” How often do we realize we are being distracted, and turn our attention to the cosmic events?

Attention is precious, and paying attention in a world of distraction can be a precious gift.

If you are like me tonight, as you listen to this sermon, just hearing that word gift might trigger a whole list of gifts left to be wrapped after the service. The gifts we give in this season might have little to do with the story of Jesus, laid in a manger, no room at the inn. But the tradition of gift giving has value at Christmas.

Isn’t it often the case though, that what we get, what we give, for Christmas is less important than the act of giving, the act of receiving. Gifts are a marker of that we have been seen, that we have been noticed. How, this Christmas, might we put down our distractions? How can we give the gift of our attention?

The word of the angel to the shepherds, idou, behold, see, pay attention, it is likely a stand in for a common expression in Hebrew, Hineh “be present.” Silas doesn’t babble that one. Hebrew is harder. But by elementary school, if a child’s name is called in class in Israel, the child responds, “Hinehni” I am present. How will you be present this holiday? Presence is radical.

One of the highest words of praise I know, one I would love to have said of me is this, “when you speak with him, it is as if no one else in the world exists.” He really pays attention. He is present. I’ve known some leaders like that. I aspire, and fail, regularly. But I know it is worth trying. Your attention might be the blessed gift needed by a family member, a niece, a cousin, a sibling, a parent, someone on the road this Christmas. Being present has the capacity to bring real change.

If attention can bring real change in our home life, how much more can our choice to pay attention transform our world?

I believe the specific neighborhood matters. Where God chose to dwell matters. Notice God does not choose the center of power, not Augustus’ Rome, nor Quirinius’ Antioch, nor Herod’s Jerusalem. God is not born even in the center of Bethlehem, a marginal village outside the capital. God is born outside the village, to an unmarried couple who could not find a roof for their heads. God pays attention to the edge of the edge of human existence. It is there, with the poor, with the shepherds, with the animals, with a family who have been forced onto the road, it is there that God becomes present.

God makes a specific choice of where to be present. God pays attention, and God asks us to pay attention as well. Location continues to matter. The African American theologian Howard Thurman wrote the following words of Christmas:

When the song of the angels is stilled,
when the star in the sky is gone,
when the kings and princes are home,
when the shepherds are back with their flocks,
the work of Christmas begins:
to find the lost,
to heal the broken,
to feed the hungry,
to release the prisoner,
to rebuild the nations,
to bring peace among the people,
to make music in the heart.

Idou! I swear, since starting to work on this homily, and opening up the Greek, I’ve heard Silas speak Greek in his babbles at least daily. Idou! Behold.

God has come to us, Christ has been born for us. Scandalously, Christmas tells us, God chose to become vulnerable. God chose to pay a humbling attention to our human needs. God continues to be present to us.

I am an Episcopal priest, and I serve with the people of The Church of the Holy Communion. My husband Ellis and I live in St. Louis with our labradoodle Oscar. I read, write, travel, play ultimate frisbee, and goof around with various acoustic instruments.

Find me on Social Media