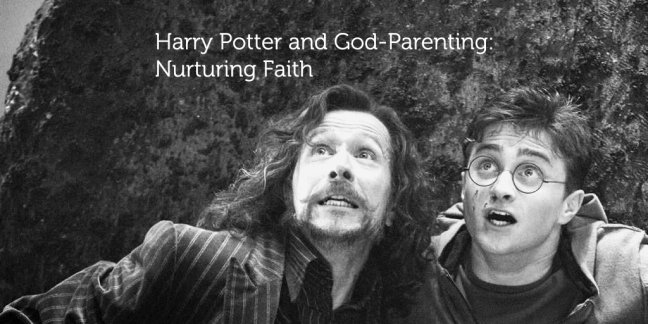 The end of school isn’t easy for some students, and it was particularly true for Harry Potter. Returning to the muggle world, to a family who treated him poorly, and did not understand his magic made things worse. As the fifth book in JK Rowling’s series opens, Potter is frustrated. He’s having nightmares, and he has no one to talk with, no one who will understand the pain of his scar, the frustration of being the world’s most famous wizard, no one who will understand the fear he feels that evil has re-entered his world. Then Harry remembers his god-father Sirius.

A priest friend of mine, the Rev. Patricia Lyons, has written a book about Teaching Faith with Harry Potter. This may seem surprising to some. When I taught school in Honduras, the headmistress of the foster center where I taught had banned the books. They were “brujeria” (witchcraft), in her eyes. The ban, of course, made the stories more enticing and Harry Potter was every kid’s favorite story. Lyons argues that the Potter stories have a great deal to teach us about faith, about hope, about love, and yes, about evil. She argues that the author JK Rowling could be understood like CS Lewis or JRR Tolkien, as a writer of Christian parable.

If she’s right, if these books are useful for teaching elements of the Christian faith, one of the strongest arguments is the role of the godparent for Harry Potter. I could ask you to raise your hands if you are a godparent. I would imagine that many hands in the room, perhaps the majority, would go up. I could then ask you, how many of you have a deep abiding relationship with your own godparent. For how many of you did a Godparent play a role in shaping your faith. I would imagine the number of hands would be far fewer.

I have been proud to stand up at the baptisms of three god-children. I have responded to the questions:

I have answered these questions, “I will, with God’s help,” and in the months and years since, I have wondered exactly how to be responsible, how to help this child grow into Christ’s full stature. I’m not sure I have really settled on the answer. god-parenting isn’t particularly well modeled in our society writ-large. But today’s scripture seem to point in a particular direction.

Much had been made of this encounter of Paul on the road to Damascus. Paul is thrown from his horse, meets the Risen (and glowing) Christ, and Paul decides to stop leading the persecution of Christians, and instead become a preacher. This is perhaps the greatest conversion story in history. The road to Damascus represents an abrupt turn for Paul, a big miracle. But I would argue the bigger miracle is Ananias.

Imagine hearing from God, “Ananias, go and care for the man who has arrested your friends. Go and care for the one who persecutes your church family. Go to him. Care for him. Heal him.” You can understand why Ananias has questions for God.

And yet Ananias goes. He reaches out to this difficult figure. He sits with Saul. He says he has come for Saul’s healing. He tells him he’s not alone. Then the scales fall from his eyes.

This is the only story we have about this certain disciple Ananias. After Saul is healed, affirmed, and baptized, he fades back into the background. But Saul never forgets. Years later, Saul is now called Paul, and he has been arrested for preaching, he gives testimony, and tells the story of his conversion. He says a disciple called Ananias came to him, but Paul adds to the story. He says Ananias told him, “‘The God of our ancestors has selected you to know his will, to see the righteous one, and to hear his voice. You will be his witness to everyone concerning what you have seen and heard. What are you waiting for? Get up, be baptized, and wash away your sins as you call on his name.” For Paul, the healing reached more than his sight.

In Ananias, Paul encountered someone wise, someone willing to take a risk on him, someone willing to share wisdom. Ananias’ words validate Paul’s vision, his call. Ananias sat with the wounded and frightened man and said, essentially, “you are not losing your marbles. I too have heard this voice. You have a call, a role to play, a place in this community. God will be with you.” Saul needed these words. As much as he needed to see again, he needed his vision affirmed. He needed a mentor. He needed a friend. Dare I say, he needed a godparent?

In your own life, who has played the role of Ananias? Who has mentored you? Who has blessed your vision, your call? Who has sat with you in the crisis? Who has helped you see? If we are lucky, we have had a few such people in this life, mentors willing to take a chance on us, more experienced leaders willing to risk giving us a shot.

As I described the role of the mentor, I hope you have been able to summon names and stories of your own. So often these mentors come in school, and in work settings. Could we reclaim this role in the community of faith?

How can we as a church support, engage, and encourage good god-parenting? How can we support one another as disciples?

Yesterday, a Presbyterian minister did something courageous. He named failure. The Rev. Mika Edmondson is a pastor in the Orthodox Presbyterian Church, the denomination of the perpetrator of last week’s terrorist attack on a Poway synagogue. Pastor Edmondson said to the Washington Post, “We can’t pretend as though we didn’t have some responsibility for him — he was radicalized into white nationalism from within the very midst of our church.” This is brave. The pastor names a failure. As a church we have a role. At times, good god-parenting is about saying “yes,” helping one another hear that we are loved, we are called, we have a place. It also must be about saying “no.” God parenting, mentoring in faith, must be about pushing back against hate, against fear.

This kind of God parenting takes courage, takes curiosity, takes a willingness to ask questions, to listen, to push back. We need good God parents. We need mentors in the faith. We need people willing to name Christianity as a way of love, not a way of violence. We need voices willing to name Christianity as a way of embracing diversity. We need folks who are willing to show our faith to be a way of inclusion for outsiders, dialogue with other faiths, embrace of LGBTQ+ people. We need godparents who are willing, in the name of their faith to challenge racism, homophobia, transphobia, misogyny, and anti-semitism. We need some good mentors in faith, people willing to stand up to name what faith means, and what it doesn’t.

In today’s Gospel story, Peter and the disciples encounter the risen Jesus. I have often heard Jesus’ questions to Peter explained as criticism. Jesus asks Peter if he loves him three times because Peter denied Jesus three times. Perhaps Jesus is pushing back, but today I am more interested in what Jesus says to Peter each time he responds:

Loving Jesus means tending others, feeding others, watching over others. I know this is hard for Episcopalians to hear at times. We don’t like to talk about our faith, especially in public. But Mentors are crucial in helping to grow faith. I hope you can recall someone, whether they were officially your godparent, or they played the role unofficially, whether you had a long ongoing relationship, or it was a short season of life I hope you can name someone who helped to nurture your faith. The work of godparent often spreads naturally out beyond those who stand nearest the font with us at our baptism. “It takes a village to raise a child,” someone once said. It takes a whole faith community to raise up a saint.

One of the best examples I know of this kind of works come from AA and other 12 step communities. When someone is new in 12 steps, they are assigned a sponsor, a mentor. That sponsor helps nurture their journey. I say it a lot, the church has much to learn from 12 step communities.

As Harry Potter considers his godfather, he knows he isn’t perfect. At times Sirius seems to avoid telling him everything. He doesn’t have the perfect piece of advice. But Harry knows Sirius sees him, hears him, understands him. After all, Sirius may be the only other wizard in the world that everyone recognizes on sight. In a letter Sirius says to him, “I know this [time] must be frustrating for you…Be careful and don’t do anything rash.” Sirius doesn’t sugarcoat. He is honest, direct. He pushes back on Harry. Sirius may not have all the answers, but he does have a willingness to listen, to help Harry know the visions are real.  Harry has a central role to play. His godparent helps Harry know that he isn’t alone.

As we share this journey of life together, as we share this journey of faith together, could god-parenting formal and informal play a role? When we are worried, frustrated, lost, could we seek out mentors and trust them with our stories, with our doubts, with our hopes? Could we find others in the community of faith to godparent us when we need it? Adults in the community who aren’t our parents, who don’t play that “parent role” to help nurture us? When we see someone hurt, or nervous, or new in the faith, could we take a risk? Could we share some time? When we see a child in the congregation a parent is struggling to parent, could we be a third voice in the room? Could we share some of our story, and most importantly listen to theirs? Could we help name the ways God is calling them, the role they have to play? Could we walk the road of faith together?