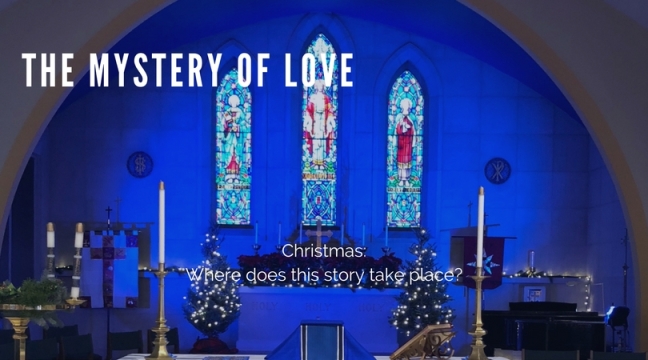 We know this story so well. Mary, Joseph, the Angels and Shepherds. Versions of the nativity have been painted on the windows of shops for weeks. Grandma’s creche might have been carefully unwrapped from ancient tissue paper before being set up on the mantel. Earlier tonight a diverse array of children presented our annual Christmas pageant, telling the story once more. We’ve heard and held, we’ve acted this story. We’ve sung the story. We know this story. This night I want to ask one question to all you experts on the Nativity. “Where?”

Tonight I want to examine just two facets of that question, the socio-geographical and the personal.

The Social Geography of Christmas

Of course the immediate geographic answer is right there in the text: “in Bethlehem of Judea,” the city of David, the house of bread. We could point to the place on a map. But since we know this story. I want to push the question a little more. The strata of this location and its meaning, the layers, run deep.

Bethlehem today is a sort of Palestinian suburb of Jerusalem, walled off from Israel, guarded by checkpoints and high walls, razor wire. In the time of Jesus Bethlehem was a farming and ranching community outside the provincial capital. An easy day’s journey from the seat of power, it was at the edges, not the center of society.

In the story we’ll read in a couple of weeks, at the end of the Christmas season, the supposedly wise men get lost on their way to Bethlehem. They’re looking for a king, and so they turn right when they see the palaces and temples in Jerusalem. They wouldn’t think to look among the little houses and huts of Bethlehem.

Location mattered in the time of Jesus, more perhaps than ever before in human history. Emperor Augustus, who in our text has declared that all the world should be registered, his star has risen in Rome. Augustus was a new kind of ruler, considered the first emperor, he transformed the Roman Republic into a monarchy. Augustus also created a new form of religion: emperor worship. He was not just the king of the known world. Augustus fancied himself divine. He required worship. He raised taxes on the poor to convert his capital into a marble coated shrine to his deity. Thanks to the emperor, all the world would be oriented toward Rome.

Provincial capitals, like Jerusalem, the seats of governors and client kings, were to reflect the glory of Rome, the power of the emperor. In a province like Syria-Palestine, far from the center, the reflection might be a bit shabby, but it was clear where power resided, and in which direction the local ruler pointed. If all roads led to Rome, Bethlehem was little more than a truck stop. Notice, Jesus isn’t even born in the center of the lesser town. No, there is no room, noteven in Bethlehem.

Tuesday this past week found me in a laundromat, along with a number of volunteers from Holy Communion. Six months ago, a team from our church launched a new ministry, “Laundry Love.” Every third Tuesday, we gather to build community in the Classic Coin laundromat. We pay for laundry, provide childcare and a little food. We also hope to engage neighbors in conversation, and laughter. Anyone is welcome to volunteer, or to come do laundry. We hope to take perhaps one of the worst chores, and make it fun. We also hope to help lighten the burden a little on families making hard economic decisions in our neighborhood.

This week, as I surveyed the washers and dryers, and the crowd of volunteers, I thought, maybe this is where Jesus would have been born today. A laundromat would be a warm place to stop if there was no room at the inn. I could see Jesus laid in a laundry basket, carefully surrounded by warm towels given by grannies who have spent their last quarters on the dryer.

Where could you imagine this story taking place today? Where does God act? Often far from the halls of power, among the least likely people, at the edge of the edge. While the king would have us all worship him, while those in power build gold palaces, the King of kings is born in such an unlikely and out of the way place and is celebrated by all the wrong people.

The Personal Geography of Christmas

I’ve already started leaning toward the second dimension of my question for Christmas:

This second dimension is personal: Where does this story take place for you?

Where does this story take place for you? Maybe I could ask that question differently: Where was your “best” Christmas?

I suspect for most everyone, save maybe the angels and shepherds from tonight’s pageants, the question takes us back in time. We remember a Christmas past with fondness. I would caution that these memories have the tendency to get polished by age. We remember past Christmases better than we may have experienced them in the moment. This capacity we have to look back across years and geography, to remember the Christmases past, can produce as special kind of longing.

If you are longing this Christmas, if you are missing loved ones, or you are just longing for the Christmas spirit, as you once believe you knew the spirit, know that longing can be a blessing. Longing itself can help us search for where this story takes place.

Brother Thomas Matus of the Camaldolese has written about the nature of faith, of religion. In the diaries from his travels to visit one of his order’s monasteries in India you learn that brother Thomas isn’t the world’s most traditional monk. As a young man in California, before he became a Christian, he was initiated in an Hindu order. It’s a very Californian story: a young white man first becomes Hindu, then converts to Catholicism. But Brother Thomas eventually joined the Camaldolese Catholic monks, an order with a monastery in India. Visiting the country connected the two parts of his spiritual journey. In India he finds a question central to all religions:

Which direction should I bow?

All religions are directional. They all point toward God. There’s a reason we often talk about a “spiritual journey.” Faith is an orientation.

If tonight you find yourself longing, you are in a place to begin the journey, to begin walking. It brings us back to the original question: Where? Which direction?

Tonight, for followers of Christ, the shepherds know the answer: Bow to the stable. Head toward that most unlikely place where God’s love chose to dwell. Bow to the vulnerable little child entrusted to an unwed girl, still too young. Bow to that manger on the margins, off the road, outside the center, in that antic cold and frustrated night. There, where you’d least expect it, God’s presence can be found.

What if the “where” of this story is exactly the question we need this Christmas? What if all of our worries about the fate of the world, the state of our own lives, could be relieved? What if instead of looking for answers to come from the elite, the empowered, we turned down a different road? What if the power to change the world was in the hands of the most unlikely  people?