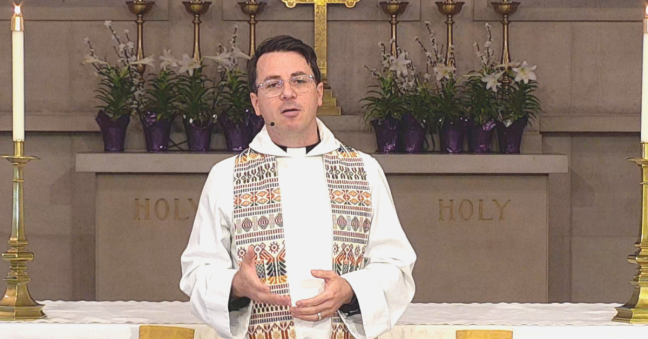 Today is Good Shepherd Sunday, that Sunday in Easter when we read this beautiful poetry, this reminder that we belong to One who will lead us beside the still waters, who will see us through the valley of the shadow of death. We belong to the Good Shepherd.

Maybe it is just me, but when I hear these passages, they conjure very specific Sunday school illustrations, nice-looking white hippy Jesus laughing while carrying a lamb on his shoulders.

Before we get there, a little context. I hadn’t planned on preaching today. I am grateful to Canon Whitney Rice, who had been scheduled to preach. Canon Whitney will be with us at virtual coffee hour, and she will be preaching later on this year. But after this week, I asked to be the one in the metaphorical pulpit.

This week: waiting for justice

Tuesday afternoon I got a text message from Rudy Nickens on the vestry, it said simply, “Verdict reading is at 4:30.” Now, Rudy is visiting his mama after a long quarantine, he’s currently on East Coast time…when I saw his text the pit of my stomach dropped. When I checked the time, thankfully it was an hour less than I initially thought, but I still had to wait.

I remember waiting, six and a half years ago now, I remember waiting on the grand jury decision over whether to indict the police officer who killed Michael Brown. Ellis and I were in New Mexico with family, and still we were checking our phones constantly. The night the announcement came, we watched video of the second wave of protests, the fires that burned into the early morning. I remember the smell of soot on West Florrissant, when I joined fellow clergy to pray and to march in the days following the non-indictment. I remember the hopeless feeling, despite all the activism that summer and fall, nothing had changed.

Reflecting on Ferguson, Pastor Otis Moss III of Trinity UCC on the South Side of Chicago quoted Langston Hughes, who famously asked in his poem Harlem:

What happens to a dream deferred?

Tuesday, as I waited, I couldn’t help but re-live the scenes of 2014. I watched for local announcements where actions might be planned. On Tuesday I knew I wasn’t alone, as we waited on the jury, many of us in St. Louis were wondering, would our city explode again?

This morning, I want to talk about power. As I said, I think the Good Shepherd needs to graduate from Sunday school. In order for that to happen, we have to know about context. You’ve got to know the prophetic background from which Jesus preaches.

Jesus here is riffing on the prophet Ezekiel. Jesus knows his haftarah. In the 34th chapter God commands Ezekiel to prophesy against the shepherds saying:
You drink the milk, you wear the wool, and you slaughter the fat animals, but you don’t tend the flock. You don’t strengthen the weak, heal the sick, bind up the injured, bring back the strays, or seek out the lost; instead you use force to rule them with injustice.
Ezekiel’s prophecy is an indictment, a judgement from God, against those who are failing the sheep.

Whenever a prophet talks about shepherds, hear in the background a discussion about power. Jesus today is preaching into a recognized metaphor about power. Ezekiel and Jesus are making a distinction. Just because you have control, just because you can use force, it doesn’t make you powerful. Real power, Godly power, is something else. The power of God is never about coercion.

If unjust rule was at play in the time of Ezekiel, it was worse for Jesus. Remember, Jesus lived in occupied territory. There were disputes about taxes because the Roman emperor and his clients were extorting the common people. The wealth of Rome didn’t trickle down to the peasants of Galilee. In Rome’s empire money flowed up from shepherds, up from the carpenters, and fishermen. Money flowed up to the Herods, the Pilates, and the Ceasar Augusti. That tax money didn’t provide infrastructure for the peasants. It didn’t build schools or libraries. Taxes were spent keeping an army, a police force, fed and armored. The taxes were paid so that Rome’s power could be enforced.

St. Paul, in the second chapter of his letter to the Phillipians, quotes what was probably an early hymn of the church. “Let the same mind be in you that was in Christ Jesus, who though he was in the form of God, he did not grasp after equality with God, but emptied himself, taking on the form of a servant.” Power for Jesus is about letting go of your glory, letting go of your own priorities. Power, for Jesus, is about serving the least of these, searching out the lost sheep.

This, friends, is the radical dream of Jesus: that his followers would exercise a different kind of power. Mary Parker Follett, a nineteenth century social worker and philosopher would name it this way. Real power isn’t “power over,” she said it is “power with.” Jesus imagined a world where power was defined through service, through other-centered compassion and love. “If you would become my disciple, deny yourself, take up your cross, and follow.” “The greatest among you shall become like the least.” Jesus imagined a world where power was exercised differently, where we understood power differently. In the Kingdom of God, or as Dr. King translated, in the beloved community, power is measured in compassion, in healing. Power is measured by justice.

The verdict: what it means and what it doesn’t.

On Tuesday, when the verdict was announced, many of us breathed a little easier, at least momentarily. But in the days surrounding the verdict, more video became public. Another Minnesota police officer killed a young Black man named Daunte Wright. 13 year old Adam Toledo was on tape killed by a police officer with his hands in the air. In Columbus, Ohio Ma’Khiah Bryant, a 16 year old Black foster child was killed by an officer. On Wednesday protestors in North Carolina demanded body cam footage of the killing of Andrew Brown. That’s all in the last 10 days, and only the stories that became national news. Video evidence is crucial, we learned this week. And still, every time a Black or Latino parent sees one of those videos, they worry a little bit more about their kids stepping out of the house.

Our ways of exercising power are fundamentally broken. We know it. We can see it. What made Tuesday so remarkable was that the system, against the odds, actually managed to hold a white police officer accountable for the murder of a black man in his custody. Even though thousands marched in the midst of a pandemic, in Minneapolis, in St. Louis, across the world, I was among the many surprised to see a former white police officer convicted. Power in this country is still so tied to race. Power is still so broken.

Jesus offers an alternative, to those who would hear his voice. The writer GK Chesterton once said, “Christianity has not been tried and found wanting. It has been found difficult, and left untried.” The power of the Good Shepherd is still out there. We can choose this power in our own lives, to the extent we are willing to acknowledge privilege, to commit to antiracism and to fighting our own internal biases, to the degree we are willing to seek out the lost, to bind the wounds. To the extent we are willing to Give up on visions of our own glory and instead listen to our neighbor’s need. We can choose a different kind of power.

We could also choose to re-imagine power on a societal level. We could award prosecutors not for convictions, but for lives transformed. We could award tax dollars for schools not based on the price of neighborhood housing, but based on the educational needs of a given community. There was news this week that some corporations are beginning to tie corporate bonuses to meeting climate, or diversity and equity targets, it’s a start. We could measure the efficacy of our police departments by their contribution to the healing of all our communities. We could redefine power, but we have to be willing to take on radically new and difficult measures.

After preaching about the Good Shepherd, Jesus says, “I have the power to lay down my life, and to take it up again.” Alleluia, this is still the Easter Season. This is the season we Christians celebrate the seemingly absurd victory of God over the powers of this world, even over the power of death. The Resurrection tells us: Jesus’ vision could still transform our world. The power of the Good Shepherd is still living among us. How long will we wait?

One thought on “The Good Shepherd and Jesus’ Vision of Power”