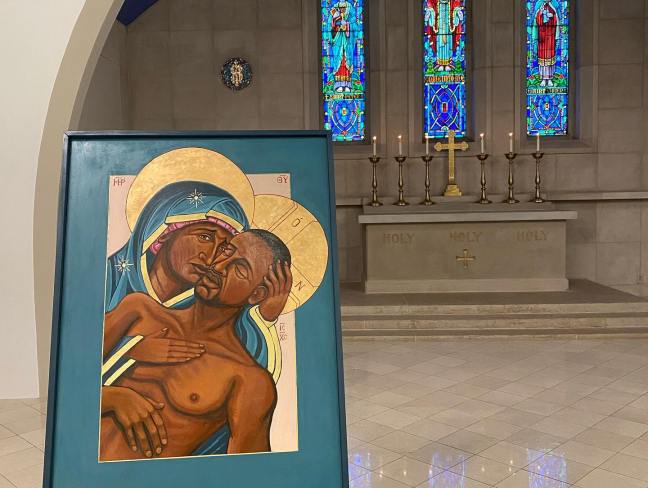 Why did he have to die this way?

When we stripped the church of its decorations, in preparation for today’s service, I had a debate with myself. The icon behind me could have been counted among the decorations that could be removed. Technically the icon is moveable. But my gut told me, “no, she stays.”

As most of you know, “Mama” was painted by a friend and fellow St. Louisan, the iconographer Kelly Latimore. She came to us this summer, after Kelly said the video of George Floyd’s death, his final calls of “Mama” brought to mind the image of the pieta, of Mary holding the body of her dead son.

This week, as the trial of the former officer who knelt on George Floyd’s neck plays out on livestream, the question “why did he have to die this way?” has been in the background of so much of the testimony. Black neighbors who filmed the interaction on their phones before being intimidated away from the scene, the cashier who thought about paying himself when he saw George’s $20 bill was a fake, an older witness who tried to intervene and broke down on the stand saying “I feel powerless” watching George’s death on video again, all spoke about their own fear of the police and they questioned what else they could have done to stop George’s death. An EMT was so frustrated that she was denied access to help provide care to George that the judge had to caution her about being argumentative.

I need to say, I don’t know how this trial will play out. I don’t know if the former officer will be found guilty. I do know, the gravest injustice is that George Floyd was never given a chance at a trial. And in these days of testimony, behind all of the emotion, there is simple painful question: “Why did he have to die this way?”

This Good Friday I want to offer a theological answer to the question: “He didn’t have to die this way.”

I know that answer on this day is controversial. For centuries Christians have held up the cross, the instrument of Christ’s murder at the hands of the Roman Empire. When I lived in California there was a very controversial court case trying to remove a prominent cross from public land on Mt. Soledad, overlooking the Pacific Ocean, land that is on the unceded territory of the Kumeyaay tribe. Since Constantine supposedly heard the word “In this sign, conquer,” the cross has been used as a symbol of Christian power to dominate and control.

Christians even had the gall to use the cross as a symbol of power while they blamed the Jewish community for Christ’s death. For much of Christian history, Jewish neighbors lived in fear around Holy Week, that a preacher would stir up anti-semitic hate. Holy Week was often a time when Jewish people lost their lives to Christian hate.

Using the cross this way, as a sign of conquest, as a reason for hatred of Jesus’ own people, it is a legacy with which we must struggle as Christians, as Episcopalians. This Good Friday, I want to offer that for Christians, when we contemplate Christ’s death, when we survey the cross, we should always say to ourselves: “He didn’t have to die this way.”

Orlando Espín, the prominent US Latino theologian has stated simply Jesus died because his vision was a threat the the status quo. Jesus proclaimed a beloved community where the hungry would be fed, where the prisoner would be visited, where the stranger, where the widow, the orphan, the outsider, those of other races, and classes, and religions would be welcome, not suspect, welcome. Jesus preached a message of other-centered compassion, of self-offering love, and the powers that be thought it was so dangerous they put him to death.

Jesus didn’t need to die this way. Jesus shouldn’t have died this way. John’s Gospel hints toward this understanding as it quotes Isaiah, the passage known as the “suffering servant” includes the prophecy, “By a perversion of justice he was taken away.” From our earliest days, Jesus’ followers have interpreted his death in light of Isaiah’s prophesy. Jesus’ death has been understood as a perversion of justice.

The way of self-offering love lead Jesus to the cross, but it didn’t have to lead there. Jesus did not have to die this way.

Learning from the loved ones

I have had the rare opportunity, in my ministry, to stand with family members and friends of people who should not have died the way they did. There are so many, too many, people who died by gun violence or addiction. I have even prayed and stood with people whose family members were killed in government sponsored crimes of war. Grief is always a part of these interactions.

Yes, we see grief in the image of Mary with her son’s body. But part of what makes Mama so powerful is that Kelly made a decision to change his original design. I believe this small change makes her more powerful. Based on my relationships with the families of those who have died such deaths, from what I have seen of their faith and determination, I think the change also makes her more realistic.

You see, as he originally sketched Mama, Mary’s eyes were looking down on Jesus, but Kelly said he realized that isn’t where Mary’s eyes would be. Mary wasn’t simply a servant of her grief. She was committed to the vision Jesus proclaimed. So instead Mary looks out at us, as if to say,

“He didn’t have to die this way.

What are YOU going to DO about it?”