That’s an old joke.  It sort of fits with Jesus and the Sadducees this morning.  There’s a lot of wrangling going on, and it is a bit funny.  Mostly feel bad for the woman who had to marry seven brothers.  Could you imagine? This is just one story in a group in Luke’s Gospel, that includes the question about taxes, where Jesus says, “Give to Ceasar what is Ceasar’s.”  This whole section of Luke’s Gospel could be called, “People try and mess with Jesus.  Instead Jesus messes with them.”

Make no mistake, this passage is weird.  This passage is what we like to call “insider baseball.”  First century Palestinian Jewish theological insider baseball.  Even in Jesus’ day, the crowd wasn’t really interested.  A few were, the real wonks.  You could probably have seen them lean in when they heard this question: “oh fascinating, Jesus is going to discuss the fine points of halakic legal code regarding levirite marriage and resurrection.”  Most of the disciples didn’t lean in, they leaned back, rolled their eyes, started thinking about their shopping lists.

But Jesus takes the wonky, nerdy, bullying question and turns it on its head.  Jesus, is fed up with the people who think they are in charge of God.  Jesus is done with these silly inane arguments about the fine points of a religious system.  “God is the God of the LIVING.”  Jesus says.  “Get a life.”

That’s a nice play on words, but I think Jesus really is saying to these folks: get a life.  Live.  You want to know about God, get about the project of living.

On Monday the Washington Post ran a profile of a friend in ministry who has been saying “get a life” to the church, maybe you saw it.  Nadia Bolz-Weber is a Lutheran pastor in Denver.  Nadia’s Church, the “House for All: Sinners and Saints” is unconventional, a bit like Nadia.  Nadia is 6-foot-1.  Her arms are covered with beautiful tattoos.  She has these buff arms from working out at Crossfit.  She swears like a sailor.  Her church, when I first attended, seemed to be a mix of bikers, transgender kids, homeless people, and punk rock musicians.

Nadia came through addiction, and is actively in recovery.   I know it seems odd, because I am the priest that spends so much time talking about beer, but many of the most spiritually profound people I have known are in recovery.  Nadia started a new church, in part, because she couldn’t find a church that spoke to her as deeply as an AA meeting.  She didn’t see in the churches in Denver a community of faith that could handle that much truth.

Bolz-Weber is critical of the religious leaders and institutions of her day.  She picks fights with the establishment, a bit like Jesus did with his religious authorities.  Here’s a bit from the Post about her thoughts on the mainline progressive churches today:

“This isn’t supposed to be the Elks Club with the Eucharist,” Bolz-Weber said in a taxi ride before her Austin talk. Religion should be “something that’s so devastatingly beautiful it can break your heart. Instead it’s been: ‘Recycle.’ And ‘Don’t sleep with your girlfriend.’ ”

Bolz-Weber says she abhors “spirituality,” which she sees as a limp kind of self-improvement plan. She prefers a cranky, troublemaking and real God who at times of loss and pain doesn’t have the answers either.

“God isn’t feeling smug about the whole thing,” she writes about Jesus’s resurrection and the idea that the story is used as fodder for judgment. “God is not distant at the cross. . . . God is there in the messy mascara-streaked middle of it, feeling as [bad] as the rest of us.”

This is the thrust behind the words of Job this morning.  Job is a troublesome book for me.  I still don’t understand, really, why God lets Job suffer.  I took my theology courses.  I understand that Job is an allegory that is meant to teach us that God does not reward us for good behavior and punish us for bad.  Job is the anti-prosperity Gospel.  Intellectually, I get it.  I still have a hard time reading about Job losing his family, being covered in boils, ridiculed by his friends.  We pick Job up in the 19th chapter today, just as his friends have told him to reject God.  Job’s family are all dead.  He’s lost his land and possessions.  Job has lost everything.  Job is covered in boils.  Here is Job’s response:

I know that my Redeemer lives

Do we know our Redeemer lives?  Do you?  If our church is to be more than an “Elks club with the Eucharist,” I think we have to struggle with this question.  Folks in recovery know their Redeemer lives.  There is a reason why “Believing in a higher power” is the second step, right after “admitting you have a problem.”

In my own life, I’ve found that I know my Redeemer lives, most palpably, at the extremes of life.  At the moments of great joy and great sorrow.  I feel God’s presence, the presence of the Living God, it seems at the great moments of life: at weddings, at ordinations, at graduations, and celebrations of the holidays with my family.  God also shows up when I have great anxiety, or struggle with depression, or lose a friend, or a job, or celebrate the holidays with my family.  God is in the good and the bad for me.  The challenge, the ongoing challenge, is to live my relationship with God beyond the extremes. 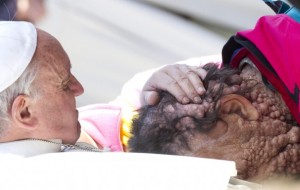 Did you see the picture of the pope holding that man covered in tumors this week?  If you didn’t, Google it when you get home.  There was a photo of a man who, like Job, suffered with a terrible skin condition.  In the image he is held by pope Francis.  When I saw that image I thought, “that’s the Gospel.”  Two miracles had to take place for that photograph to exist.

1) A man who lives his life in pain, both physical and mental, because he lives as an outcast, had to come out in public.  He had to show his skin to the world in the midst of the packed square at St. Peter’s.  That man took a chance, probably expecting people to flinch and pull away as they saw him.  But the miracle was that he risked that embarrassment.  He was looking for the living God.

2) Another man, Jorge Borgolia, Pope Francis, had to notice that man in the crowd.  The old priest allowed himself to be moved by God’s love, rather than the fear of catching whatever disease this man had.  He came through the crowd to embrace the suffering man, because he knew that the living God would do the same.

That image, communicated to me what it is to act knowing that your Redeemer lived.  Both men overcame fear to embrace one another.  An embrace like that can communicate God’s presence.  Not all of us are pope Francis, but we too can reach out to embrace those who unsettle us.  God invites us to know God’s presence in reaching out to the other.  God invites us to know that our Redeemer lived sometimes in the most surprising places.

Nadia Bolz-Weber, in the article, says that she “hates camping.”  She doesn’t find God in sunsets.  She’s exaggerating to make a point, but she says  “I think God is wanting to be known. And my experience of God wanting to be known is much more in the person who is annoying me at the moment rather than in the sunset,” she says. God is present in these challenging interactions, she says.

Jesus’ strange message to the Sadducees’ strange question today involves an invitation, to know the living God.  It is an invitation to let go of our conventions, our sense that religion is about rules.  God doesn’t mind if we eat our entire dinner with our salad fork.  The living God simply invites us to know that our Redeemer lives.  Our God is alive, available to us in every moment, in every challenging interaction, in the celebrations and defeats of life.

I know my Redeemer lives.

2 thoughts on “I know my Redeemer Lives”